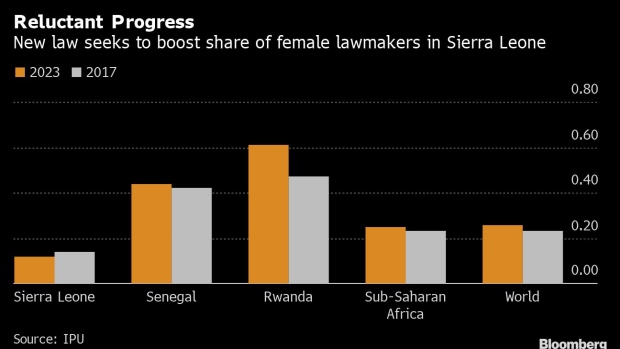 (Bloomberg) -- Sierra Leone enacted a law meant to increase the number of women in decision-making roles in both private and public sectors, five months before presidential elections.

The Gender Equality and Women’s Empowerment Act, which President Julius Maada Bio signed into law Thursday, calls for a 30% minimum quota of women in parliament and cabinet. It also requires companies to set aside 30% of senior-level jobs for women, with equal pay and at least 14 weeks of maternity leave, according to a statement from a communications consultant to the government.

“We, men, have yet to see or acknowledge women’s rightful position fully, and this law will give us tools to correct that,” Bio said in a speech Thursday.

Employers who fail to meet the quota risk a fine of at least 50,000 new leones ($2,580), and jail sentences of at least three years for denying equal financial support, according to the earlier statement.

Sierra Leonean women make up 12% of parliamentarians, according to the Geneva-based Inter-Parliamentary Union, which tracks representation in national parliaments. Bio, who’s been in power since 2018, himself has named just four women to his 28-member cabinet when he first took office. He’s now seeking a second five-year term in June elections.

--With assistance from Samuel Gebre and Ougna Camara.

(Updates with quote from Bio in third paragraph)