The Federal Reserve delivered its expected rate increase and then basically told markets they are on their own when it comes to determining what’s next. Stock bulls took that as a reason to celebrate.

Chair Jerome Powell said the central bank won’t offer explicit guidance on the size of the next rate move after boosting its target by three-quarters of a percentage point and suggesting another “unusually large” increase might be warranted at September’s meeting. He then quickly added that thereafter “it will likely become appropriate to slow the pace of increases.”

The move away from clear signals on the size of coming rate increases emboldened equity bulls to speculate that the Fed could soon pivot away from its aggressively restrictive policy. Treasuries also rallied, sending the two-year yield below 3 per cent in a sign that rates markets expect the central bank could reverse some of its tightening in the next year. Stocks are on pace for the best month since July, extending a rally that began with signs that inflation may have peaked and the economy can avoid a deep recession. 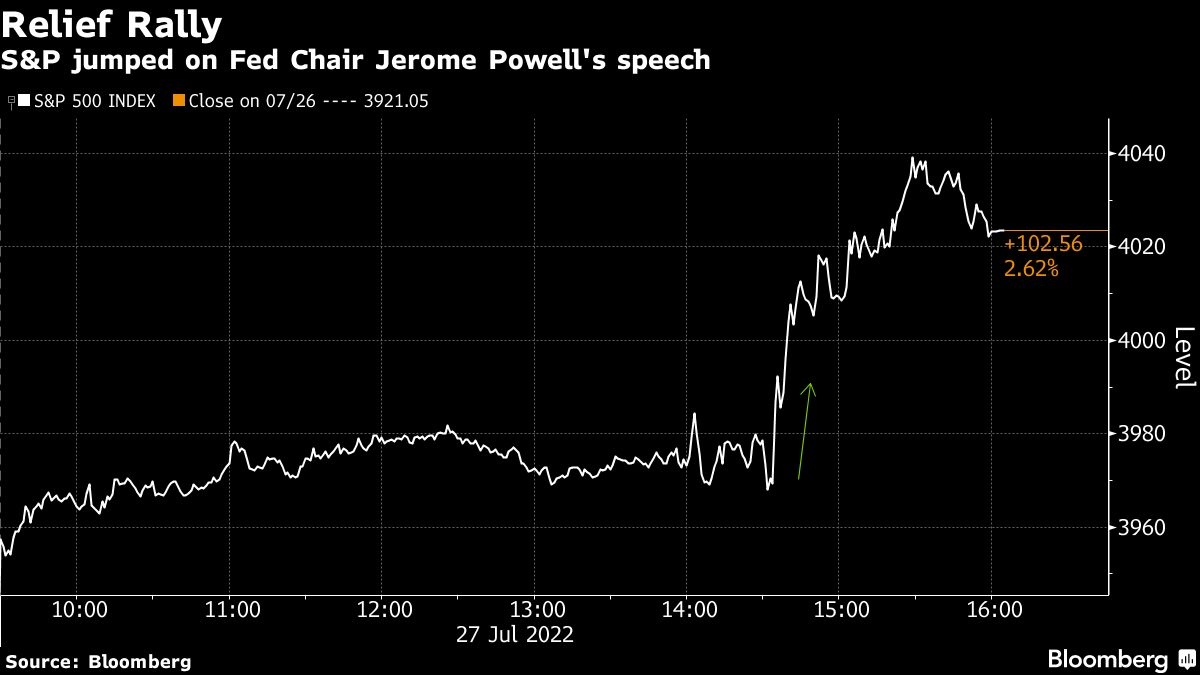 While risk assets rallied, commentary from Wall Street brought a more diverse set of views on whether the immediate reaction in financial markets is warranted. Here’s what they were saying:

“First and foremost, the market got very much what they expected in terms of the rate hike,” he said. “No surprises, right? That’s a sigh of relief. The second is, Jerome Powell and the FOMC are really walking away from forward guidance. That’s something that he wanted to do for a year and now it appears as though they’re not going to stick their neck out and try to let us know order of magnitude of next rate hike. As a matter of fact, he leaned into the fact that, at some point in time, the size of the rate increases likely would go down -- that comment in and of itself felt like the money ball.”

“Chair Powell has not pushed back on current market pricing, indirectly supporting the idea that rates will peak below 4 per cent and that there could be rate cuts in mid-2023. Although that would likely have to involve a recession, markets are simply focusing on the suggested sharp U-turn in policy actions next year, pushing down on bond yields and permitting tech stocks and broad markets to perform well. This may be a little myopic - Powell has not ruled out another 75bps hike nor has he given any sense that recession can be avoided. Against that backdrop, equity markets are going to be under further valuation compression pressure, as well as downward earnings pressure.”

“One thing is clear – the Fed still thinks this economy can withstand ‘ongoing increases’ in interest rates because while the economy is slowing, jobs growth is not yet stalling out. If there is any sense of an upcoming Fed pivot, there are no hints of it in this statement yet and looks like the Fed sees a runway to continue to raise rates.”

“I think they see some weakness in labor markets, but also see the high inflation numbers, so it’s a very mixed situation since the ‘strong labor economy’ has been the justifier for faster moves. And a slowing labor economy may be what they want some signs of but they don’t want that to go too far.”

“Powell says the Fed needs to slow demand to ‘let supply catch up’ but the intent to raise unemployment to get there also hampers supply. Expect delays for supply to ‘catch up.’ Inflation is likely to outpace wage growth for an extended period of time. Painful resulting and continued reduction in purchasing power and standard of living will fuel recession sentiment.”

“Market rallying every time Powell says they will continue to raise rates. Counterintuitive, perhaps, but reflects the obvious: The Fed will cause a hard landing.”

“Seventy-five basis points is a big increase especially coming off from the prior 75 basis point,” he said. “Chair Powell has been very adamant that he is open to front-loading the hikes. So is that done now? The bond market is a little bit more worried about a hard landing still.”

“The only messaging here, if there’s any slight pivot, is that they open with the line, ‘recent indicators of spending and productions have softened.’ So it’s kind of acknowledging they’re seeing some softness, but they quickly follow that with ‘nonetheless job gains have been robust.’ So again, to me, that’s the message that what they’re focused on is the job market. That the job market really has to deteriorate materially for them to pivot.”

“With some softening of recent economic data, Fed officials likely didn’t feel the pressure to go beyond market consensus with regards to the level of rate change in the policy rate. There will be a sufficient amount of time between now and the next FOMC meeting in September for officials to digest incoming data and the effects that policy change has had since the beginning of the year. Overall, there were no surprises to today’s Fed announcement and the action today ultimately sets the table for more optionality this fall.”

“A corner of the market likely feared more hawkish signals about future policy, so we are perhaps seeing a relief rally. Powell also just signaled that he sees rates reaching a ‘moderately restrictive level’ of 3.0-3.25 per cent by year end -- and that’s lower than market expectations by 25 basis points. But investors should be aware that Powell is clearly signaling that the Fed will do what’s needed to bring inflation down.”