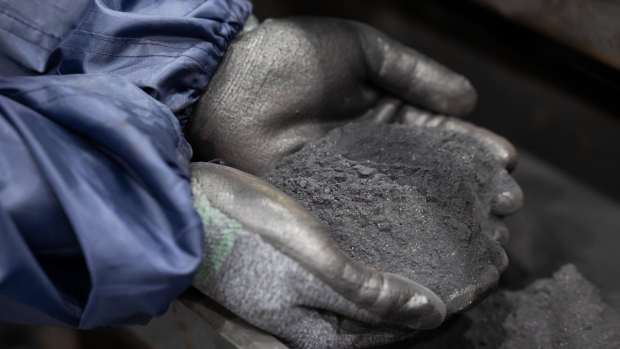 Battery powder from vehicle batteries at the SungEel HiTech Co. factory in Gunsan, South Korea, on Tuesday, April 26, 2022. Founded in 2000, SungEel specializes in recycling lithium-ion batteries. It collects old and defective cells from automakers and some of the country’s biggest battery makers, including LG Energy Solution, and has the capacity to extract about 4,400 metric tons of nickel and cobalt annually. , Bloomberg

(Bloomberg) -- Sigma Lithium Corp. says the results of a drilling program in Brazil confirms it will emerge as one of the world’s biggest producers of the key ingredient in batteries for electric vehicles.

The Grota do Cirilo project in Minas Gerais state is on track to begin producing early next year at an annual rate of 37,000 metric tons of lithium carbonate equivalent, as it wraps up engineering for a second phase that would take output to about 72,000 tons in 2024, the Vancouver-based firm said in statement.

That would make it the biggest hard-rock lithium project in the Americas, and behind only Soc. Quimica y Minera de Chile SA, Albemarle Corp. and Pilbara Minerals Ltd. in the global lithium rankings. Drilling for a third phase has boosted resources by about 50% to almost 86 million tons, Sigma said.

It would also mark Brazil’s arrival on the global lithium stage as the biggest iron ore producer after Australia looks to lure more exploration and development in minerals key to the clean energy transformation at a time when the pandemic and the war in Ukraine accelerate the splintering of traditional trade ties.

“This is us walking the talk,” Ana Cabral Gardner, co-chief executive officer said in an interview. “We’ll put Brazil on the map.”

Controlled by Brazilian private equity fund A10 Investimentos, Sigma has signed supply deals with LG Energy Solution and Japanese trading house Mitsui & Co. It’s fully funded for the first phase and plans to use project finance for the second phase.