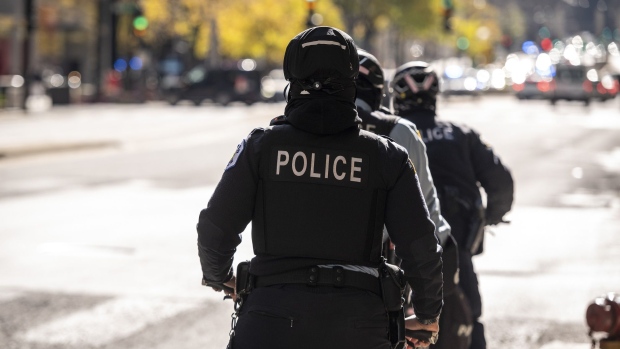 Chicago police officers patrol Michigan Avenue in Chicago, Illinois, U.S., on Nov. 2, 2020. After being caught off guard during nationwide social unrest this summer and suffering millions in damages, retailers have spent months prepping for another possible bout of vandalism on Election Day. Photographer: Christopher Dilts/Bloomberg , Bloomberg

A judge ordered the head of Chicago’s police union to stop urging officers on social media to defy a requirement to report their Covid-19 vaccination status.

The temporary restraining order hands a momentary victory to Chicago Mayor Lori Lightfoot in the fight over the mandate, which threatens to widen into a public-safety issue if police officers walk off the job. Cook County Judge Cecilia Horan ruled late Friday that irreparable harm was possible if union leader John Catanzara Jr. continued to make his statements.

Lightfoot has argued that Catanzara, president of Fraternal Order of Police Chicago Lodge #7, was already jeopardizing public safety and engaging in a work stoppage by telling officers to snub the requirement to report their status on the city’s employee portal.

The reporting deadline was Friday. Chicago has said that unvaccinated officers could be placed on unpaid leave, though city officials say there’s no immediate threat to the jobs of officers who don’t comply.

Catanzara said this week that half of Chicago’s roughly 13,000 police officers might not show up for work this weekend.

Chicago’s impasse is one of scores of legal fights around the U.S. over vaccine mandates, from public sector employees to health care workers. Workplace requirements have largely survived a first wave of legal challenges.