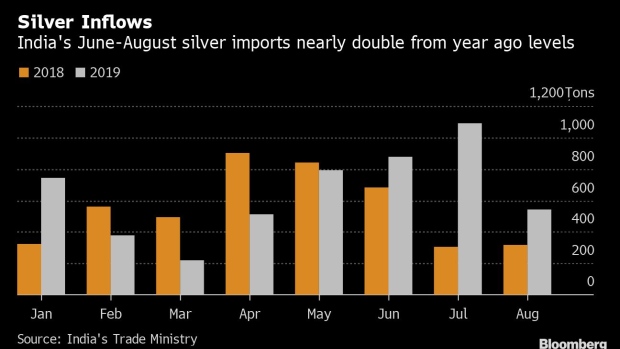 Imports of the poor man’s gold jumped 72% from a year earlier to 543.21 tons in August, according to the latest available data from India’s trade ministry. In contrast, inbound purchases of gold plunged by an equivalent amount to 32.1 tons, the lowest in three years, as record high prices sapped demand in the world’s second-biggest consumer of the metal.

Gold has gained about 18% this year as the U.S.-China trade war hurts global growth and central banks loosen policy. In India, benchmark gold futures in Mumbai rose to record highs last month, while silver futures, though up 18% in 2019, are still almost 40% away from an all-time high in 2011.

The metal, at around 45,900 rupees ($646) a kilogram, is about eighty times cheaper than gold and far more affordable as an investment or the token bullion purchases Hindus consider auspicious in the run-up to the festival of Diwali later this month.

“The price point is so much lower that things are working in the favor of silver,” according to Chirag Sheth, a consultant at London-based Metals Focus Ltd. “It is still very, very reasonable to buy silver compared to gold.”

Wider use of silver including in electrical components and for religious occasions and weddings is boosting consumption, he said. In addition, for silver “the whole market structure has changed,” as designs have evolved and “are more in line with what millennials want.”

While silver imports may moderate in the remaining months of the year as a slowdown in the economy weighs on consumption, demand will still be better than for gold, Sheth said. Hindustan Zinc Ltd. is the only silver producer in the country, which ships in most of the gold and silver it consumes.

“When we talk to people in the market, they say Diwali is going to be bad for gold but for silver it is going to be okay,” Sheth said. “It’s not so bad.”

To contact the reporter on this story: Swansy Afonso in Mumbai at safonso2@bloomberg.net

To contact the editors responsible for this story: Phoebe Sedgman at psedgman2@bloomberg.net, Alpana Sarma, Keith Gosman