Reddit investors have discovered silver, with everything from silver miners, silver ETFs and the actual price of the physical metal itself soaring on Thursday.

The first signs came late Wednesday, when comments appeared on internet chatroom r/wallstreetbets, the same investor board that started the wild short squeeze in Gamestop Corp. and other companies. The comments centered on iShares Silver Trust, the biggest exchange-traded instrument backed by the metal, calling it “THE BIGGEST SHORT SQUEEZE IN THE WORLD,” and citing banks manipulating gold and silver prices.

Precious metals have long been the home of conspiracy theorists ranting against central banks and big government, which may make it fertile ground for retail investors’ rage against the financial machine. While commodities markets are hardly immune from wild swings, they typically have a much higher barrier to entry, so squeezes tend to come from actions by institutional, rather than retail, investors.

Small miners had the biggest moves, though the physical metal also rallied. First Majestic Silver Corp., which was cited as a short-squeeze target, soared as much as 39 per cent in New York on Thursday, while iShares Silver Trust gained as much as 7.2 per cent and spot silver gained 6.8 per cent, the biggest jump since August.

“There’s a short squeeze going on in silver. The ‘hoodies are all rolling into silver and the party is on,” Phil Streible, chief market strategist at Blue Line Futures LLC in Chicago, said in a phone call. “All those other stocks like GameStop and AMC, they’re dumping because they’ve been restricted, and they gotta go into other short opportunities and silver is an easy identifiable target.”

The economic data that came out Thursday morning, which included a larger-than-expected drop in jobless claims, have become “a moot point” for traders, Bob Haberkorn, senior market strategist at RJO Futures said by phone. “This isn’t predicated on any global events, it’s just people on a message board putting all their guns towards the precious metals markets.”

Options markets were bid up in the frenzy, with traders and brokers seeing wide bid/ask spreads on the IShares and Comex contracts.

“The implied volatility being quoted in the options market at this moment is wider than I’ve ever witnessed.” James Gavilan, principal and adviser at Gavilan Commodities LLC, said in a phone interview. “The market is factoring in large swings in the silver price, and an already illiquid market is showing extremely wide quotes for options, which means that traders are concerned about the difficulty of hedging their positions.”

The buying in silver and gold spilled over to the base metals complex on the London Metal Exchange, with copper erasing early losses, while “Chinese night desks buying” also helped the metal, according to Tai Wong, head of metals derivatives trading at BMO Capital Markets. Copper for three-month delivery rose 0.7 per cent to US$7,910 a ton in London. 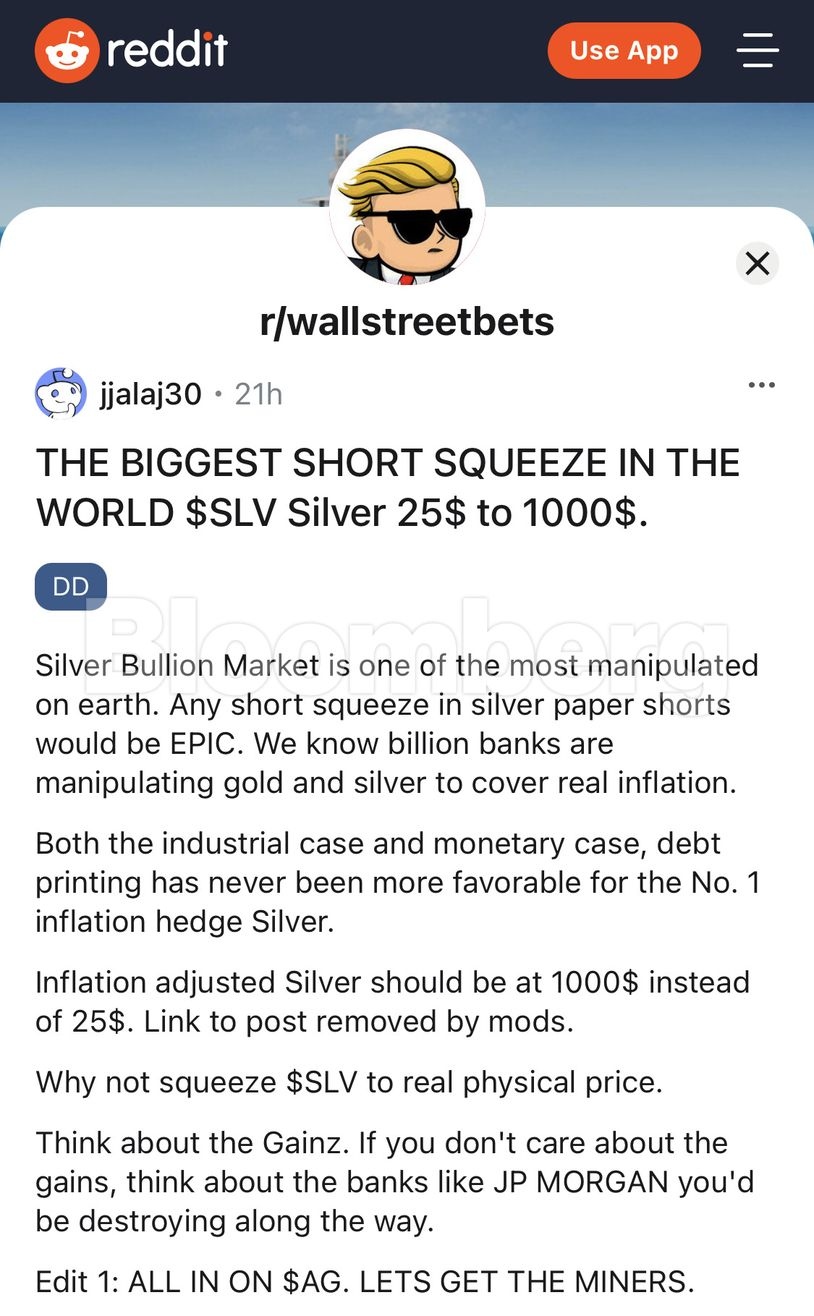