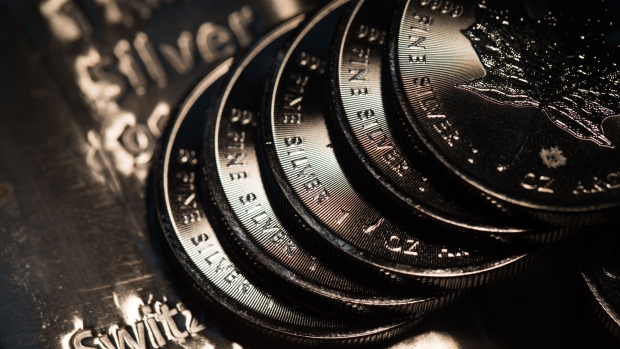 (Bloomberg) -- Retail sites were overwhelmed with physical demand for silver on Sunday, suggesting the Reddit-inspired frenzy that roiled commodities markets last week is spilling over into physical bars and coins.

Sites from Money Metals and SD Bullion to JM Bullion and Apmex, the Walmart of precious metals products in North America, said they were unable to process orders until Asian markets open because of unprecedented demand for silver.

Premiums on American Eagle silver coins have risen to close to $5 from a normal level of $2 over the past three days, according to Everett Millman at Gainesville Coins in Florida. His company’s website has a notice saying orders are taking longer than normal to fulfill.

“That absolutely motivates more people not only to jump on the bandwagon with the Redditors,” Millman said by phone. It also “reinforces the bias that holding physical silver is a safer investment as opposed to speculating on the stock market.”

Retail traders, inspired by Reddit posters, stormed into the silver market last week and successfully drove up prices of the physical metal, silver miners and exchange-traded funds. Spot prices, silver futures on the Comex and the largest silver exchange-traded fund, iShares Silver Trust, all rose more than 5% in the week.

What’s unusual this time in the physical silver market is that “everybody has been raising their premiums,” according to Millman. In normal times, some retailers will be able to offer lower premiums.

There are also signs that investors are holding onto silver they own, rather than trying to take profits.

“Now we’re seeing nothing, no single offer, which is scary,” Peter Thomas, senior vice president at Zaner Group, said by phone from Chicago. “Whatever we sell, people are holding it. There’s no inflow of metal at all.”