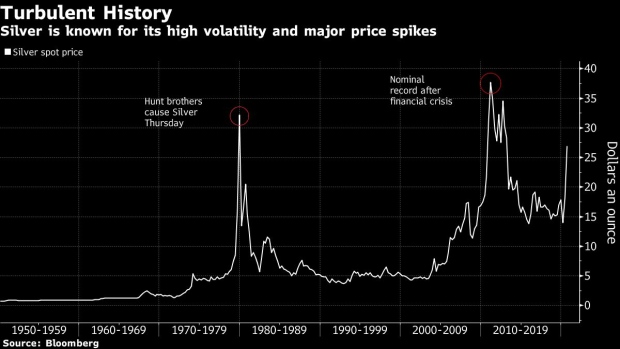 (Bloomberg) -- Ned Naylor-Leyland has been all-in on silver for 18 years, earning derision along the way from fellow investors favoring the more glamorous gold. Now, with silver’s price skyrocketing 51% this year, he’s got reason to feel vindicated.

The manager of the $1 billion Merian Gold and Silver Fund in London proudly calls himself a “silver bug,” a term describing an investor whose fervor for the precious metal is more extreme than the typical bullion enthusiast’s. The bugs foresee a crash of the fiat cash system in the aftermath of unprecedented monetary stimulus, putting silver back in play as a viable currency. Their core tenet is that gold’s cheaper, more volatile cousin will continue surging in value.

“I’ve been waiting since 2002 for the inevitable demise of this monetary system,” Naylor-Leyland said. “I’ve been standing there waving on the top of a hill for the last 20 years, and suddenly everyone’s pointing at me saying, ‘That man’s a genius.’”

They have plenty of forebears. The Coinage Act of 1873 demonetized the metal in the U.S., sparking backlash against the government and allegations of corruption from the “Silverites.” The most notorious speculators were the Hunt brothers, three sons of a Texas oil billionaire whose fear of inflation and belief in the metal as a store of wealth prompted them to try corner the global market in 1980. They stockpiled more than 200 million ounces, driving the price to $49.45 before it crashed below $11.

Now, the bugs are having another moment. The metal has had an outstanding year, with its gain almost double gold’s. The rise has come off the back of a weakening dollar, plunging real rates and geopolitical tensions -- all of which give investors motivation to seek haven in precious metals.

But that gain is nothing to most silver bugs, who foresee even higher prices because they believe more people will lose faith in the value of government-issued currency. Just read their Reddit Inc. message board with 47,000 members or the online Silver Forum with almost 12,000.

“Silver’s got its animal instincts back,” Naylor-Leyland said. “People have spotted it, and they’re interested in it.”

Not everyone is on board, though. Jeffrey Christian, managing director of New York-based commodities research firm CPM Group, has heard the story before.

“These guys have been waiting for the collapse of the global financial system for 40 to 50 years,” he said. “Nothing you can do can make them think they’re looking at the world the wrong way.”

The disciples point to evidence suggesting they’re right. Physical silver bars, the preferred investment vehicle for die-hard bugs, currently are in short supply, with refiners struggling to keep up with demand from dealers.

The delays also can be attributed to silver being less valuable than gold, so smelting enough bars to produce a quantity worth investing in is more labor-intensive. Whatever production there was took another hit when refineries shut down earlier this year because of the coronavirus pandemic.

For other silver-bug favorites like coins, investors are paying far more than the spot price to get hold of them. Gregor Gregersen, founder of Singapore-based dealer Silver Bullion Pte, said premiums for American Eagle and Maple Leaf coins currently are about double the usual, due to scarcity.

Retail investors’ thirst for silver is also tapping into exchange-traded funds, which added more than 8,800 tons of the metal this year. They’re particularly popular with the Robinhood Markets crowd, which prefers to invest digitally rather than by purchasing bars and coins.

The number of users buying into the largest silver ETF, the iShares Silver Trust or SLV, more than doubled in the month leading to Aug. 13, when the app stopped publishing the data.

But to the old-fashioned silver bugs, ETFs aren’t worth the paper, or smartphone screen, they’re written on. They allege the funds are backed by metal that doesn’t exist and are a tool designed by banks to absorb investor demand and curb prices.

“In this market, the only thing that counts is physical,” said Gijsbert Groenewegen, a co-founder of hedge fund Gold Arrow Capital Management who quit in 2011 to run a firm investing in silver miners. “Physical and in your own possession.”