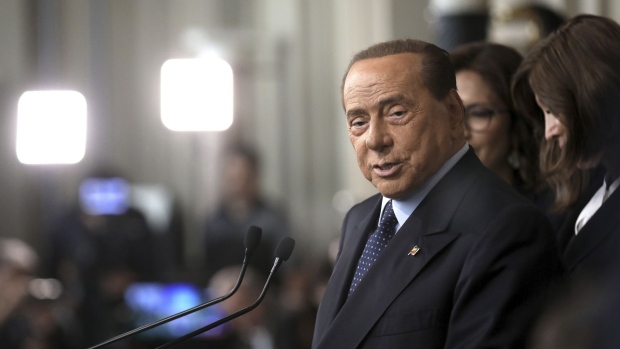 (Bloomberg) -- Media mogul Silvio Berlusconi may withdraw from the race for Italy’s presidency within days, a move that would boost Prime Minister Mario Draghi’s chances of being elected as the next head of state.

Berlusconi has been talking to party officials in a bid to secure the backing he’d need to win the ballot that starts on Jan. 24, according to people familiar with the matter. But he is realizing he’d fall short of the votes needed and is now preparing to pull out of the contest, the people said.

A spokesman for the 85-year-old former premier and Forza Italia leader, Licia Ronzulli, said in an interview with Rai TV that he has yet to decide what to do. He is continuing to speak to lawmakers and members of his party, the people added.

Draghi is the most likely beneficiary if Berlusconi accepts defeat as the most high profile candidate to succeed Sergio Mattarella as head of state. Becoming president would give 74-year-old Draghi a role at the pinnacle of Italian politics for the next seven years, though it would mean stepping back from running the country day-to-day.

In an act reminiscent of his days as a salesman, Berlusconi has been cold calling lawmakers from a landline, with printed out the biographies of each person he spoke to so that he could be more engaging, the people said.

The realization he wouldn’t be able to secure enough support came after Matteo Salvini said that the League -- which is part of the center-right coalition that includes Berlusconi’s party -- would be ready to support a different candidate, according to the people.

Without Berlusconi in the picture, an agreement on a successor to Mattarella might be easier. While there’s no official list of candidates, Draghi has been seen as a top contender.

His government is reaching the end of the road, and the former European Central Bank head has been signaling he’d be open to make the switch from the premier’s Palazzo Chigi to the Quirinal, residence of the president.

The voting process could last days. Winning requires at least an absolute majority of ballots casted by lawmakers from both houses and regional representatives. The threshold is set at 505 votes.

Italian presidents hold mostly a ceremonial role, but their seven-year mandate allows them to exert significant power over governments. They appoint the prime minister, and they have to sign each piece of law before it is approved.