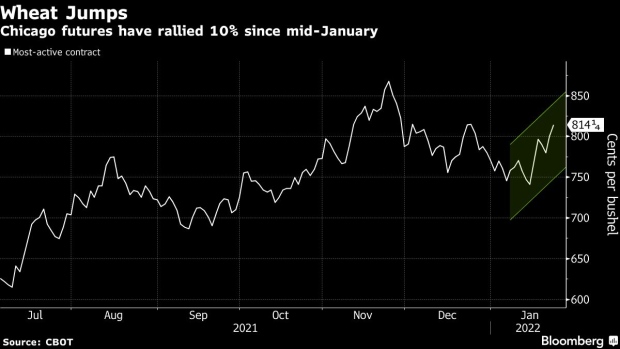 (Bloomberg) -- Ukraine’s role as a major supplier of staple crops -- from wheat to corn and sunflower oil -- means that simmering tensions are a growing focus in agricultural markets, driving prices higher and adding more pressure on global food inflation.

To be clear, cargoes are still flowing freely and there’s no indication of any disruptions. And while the U.S. has put thousands of troops on heightened alert for deployment to Eastern Europe, Russia has denied it intends to invade and Ukraine’s defense minister said an open invasion isn’t expected.

Yet crop traders are antsy, and wheat futures in Chicago and Paris have jumped about 10% since mid-January, while corn is near the highest since June. Markets may be remembering what happened in 2014 when Russia annexed Crimea, when wheat prices jumped even though shipments weren’t substantially affected, said Peter Collier, senior market adviser at U.K.-based CRM AgriCommodities.

“There are lots of buyers and consumers who are nervous,” he said.

As traders watch for fresh developments, here are three charts that show how Ukraine -- and Russia -- play an outsized role in global food markets:

The Black Sea region’s fertile soils have yielded increasingly bountiful harvests in the past two decades, making Ukraine and Russia vital to global supplies. Taken together, they account for a quarter of all wheat, corn and barley sold abroad, a threefold increase from two decades ago, according to U.S. Department of Agriculture data.

This season, Ukraine and Russia still have about 20 million tons of wheat left to ship, according to consultant SovEcon, and Ukraine is in the midst of its corn-shipping period.

Any disruptions to those flows could tighten global markets that are already grappling with shrinking stockpiles and hinging on the next harvests to replenish supply.

Black Sea grain naturally dominates in nearby markets across the Middle East and North Africa, home to several of the world’s biggest wheat and barley buyers. But their crops are also crucial further afield, with Ukraine a major corn supplier to China and Russian wheat making it as far as Mexico in recent seasons.

The rally could be overdone given that not much has changed recently between Russia and the west, according to Andrey Sizov, head of consultant SovEcon.

“However, if something goes wrong and we see Russian troops on Ukraine’s territory, this week would be just a warm-up for bulls,” he said in a note.