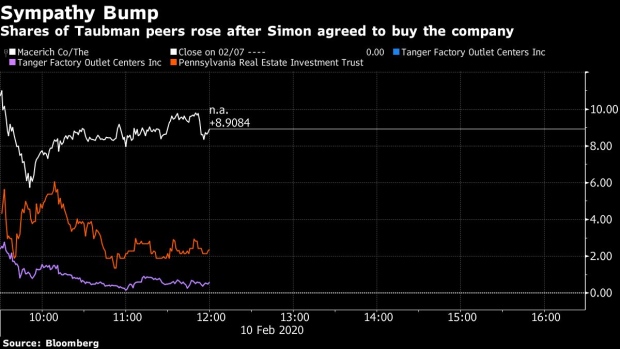 The 51% premium Simon agreed to pay on Taubman’s Friday closing share price “shows that they are willing to pay significantly more for this portfolio from where it’s currently trading in the public market,” analyst Kevin Brown said.

“There are some Class A mall companies like Macerich that have traded off significantly that could be the target of a similar type of deal,” Brown said in a phone interview. “But whether or not those companies are willing to entertain offers, that will be the determining factor.”

However, with Simon unlikely to issue diluted equity to acquire any other companies, future deals will rely on alternative asset managers like BlackRock Inc. or Brookfield Asset Management Inc. as buyers, he said.

News of the deal comes as mall-oriented REITs have faced pressure to consolidate amid a wave of retail bankruptcies, such as Forever 21.

Shares of Macerich Co. rose as high as 12% on Monday following news of the Taubman deal. Meanwhile, Tanger Factory Outlet Centers and Pennsylvania Real Estate Investment Trust gained as much as 3.4% and 6.2%, respectively.

To contact the reporter on this story: Andres Guerra Luz in New York at aluz8@bloomberg.net