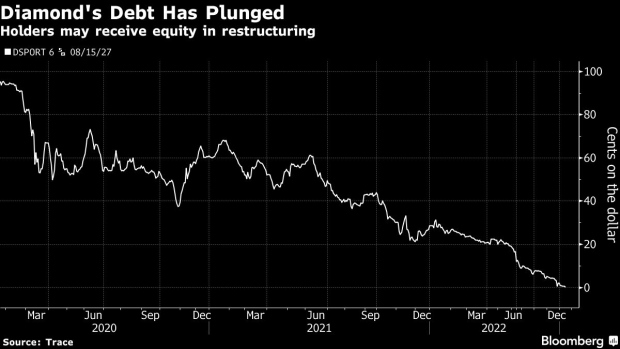 (Bloomberg) -- America’s largest owner of local sports channels is heading toward a complex $8.6 billion debt restructuring in bankruptcy court as it stakes its future on a new direct-to-consumer streaming service.

After leveraging up to buy regional sports networks from Walt Disney Co. in 2019, Diamond Sports Group LLC is suffering from a decline in cable-TV subscribers, spurring negotiations with creditors and major sports leagues about its viability as a going concern. The outcome will have serious implications for the $55 billion world of sports-media rights: the company’s channels showcase Major League Baseball, National Basketball Association and National Hockey League games to fans from Detroit and Phoenix to San Diego.

With financial troubles mounting, the Sinclair Broadcast Group Inc.-owned firm will likely skip $140 million in interest payments due mid-February, kickstarting a 30-day grace period, according to people familiar with the matter. A stark divide is emerging between would-be winners and losers: its $630 million first-lien loan is trading at 92 cents on the dollar, while nearly $5 billion of lower-ranked bonds change hands for under 10 cents — signaling a near-total wipeout for subordinated creditors.

How all this goes down matters. If Diamond, which operates under the Bally Sports brand, files for bankruptcy, it could potentially put at risk crucial broadcasting-rights revenue for the likes of MLB.

“You’re looking at a potential rewrite of the entire regional sports business on the other side of this restructuring,” said Davis Hebert, a senior telecom analyst at debt research firm CreditSights.

The restructuring plan favored by many creditors and the company itself would see the largest lenders becoming owners, turning much of its debt into equity through a pre-arranged Chapter 11 process, according to people with knowledge of the matter, who declined to be identified citing the private nature of the talks.

Plans call for the company’s first-lien debt to be reinstated when the company reorganizes, while lower-ranking obligations would become equity. Talks are ongoing and plans could change, the people added.

Diamond expects to emerge from any restructuring by May or June, one person said. At that point, its largest owners would include Prudential Financial, Fidelity, Hein Park Capital Management and Mudrick Capital Management, according to multiple people. The group ultimately aims to sell Diamond after the restructuring, one person said. Representatives for the asset managers either declined or did not respond to requests for comment.

Diamond’s financial struggles are a bad omen for the industry at large, given the amount of revenue from media rights influences how much players get paid, among other things. As the cable-TV business contracts, some sports and media executives are warning that teams and leagues will need to accept smaller rights payments going forward.

In an attempt to reach more cord-cutters, Diamond launched a streaming service across all its markets last September that allowed people to watch games online for $20 a month without a cable subscription. It’s now considering a new streaming service that would give fans the option to pay to watch individual games, or just the last few minutes. Diamond would work with teams and league partners, like offering subscribers perks like team merchandise or game tickets.

Diamond also has a deal with Sinclair to provide transition services for a period of time in exchange for equity in the restructured Diamond, said a person familiar with the matter. Sinclair owns dozens of local channels affiliated with networks like CBS and Fox and would have the heft to ensure the sports channels continue getting distributed by cable-TV providers.

But the MLB is emerging as a stumbling block to Diamond’s new streaming efforts, said one person. The league has resisted giving the company more streaming rights, fearing it could get tied up in a potential bankruptcy, and has started exploring taking its local broadcast rights back, another person said.

Earlier this month, the league hired Billy Chambers, a former executive at Sinclair and Fox Sports, to a newly created position of executive vice president for local media. Chambers will work with baseball teams on the “most effective means to distribute games to fans in local markets throughout the country,” according to a league statement.

In a bankruptcy, Diamond would have the option of ending contracts with teams, potentially cutting off crucial industry revenue while also allowing teams to reclaim their media rights. The company could also halt payments to the teams while keeping the contracts in place. If a deal is not reached, both MLB and creditors are preparing for baseball teams not to be paid, according to two people.

Another person familiar with the matter downplayed the prospect that Diamond would discontinue rights payments in a bankruptcy, adding that the company is open to bringing in teams and leagues as equity partners in any restructured entity.

MLB and the NBA declined to comment. The NHL did not respond to a request for comment.

As restructuring talks continue, creditors are eyeing the Feb. 15 coupon dates as a potential trigger. Some of the company’s creditors don’t want the company to make the interest payments, the people said, because in a restructuring, they are poised to become equity holders and don’t want to see more cash disappear.

If Diamond doesn’t enter bankruptcy soon, it will need to pony up cash to pay teams and leagues for TV rights. The company has about $585 million in cash on hand, as of September 30, but owes about $2 billion in fees to teams this year. Rights payments in the first quarter are usually the highest of the year.

“It needs cash,” said Philip Brendel, credit analyst at Bloomberg Intelligence. “Sending it out the door to bondholders doesn’t keep the business alive.”

The company is getting restructuring advice from investment banks LionTree and Moelis & Co. It recently hired AlixPartners to handle operations during restructuring, according to the people.

LionTree, Moelis and AlixPartners didn’t respond to requests for comment.

--With assistance from Eliza Ronalds-Hannon and Reshmi Basu.