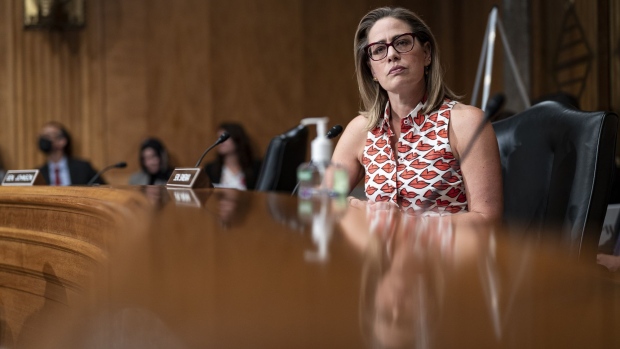 (Bloomberg) -- Senator Kyrsten Sinema’s surprise switch to an independent complicates the political strategy of Democrats ahead of 2024 elections just as they where rejoicing in a strong showing in the midterms.

Should the 46-year-old seek a second term, Sinema could create a three-way race in the battleground state of Arizona, opening the door for a Republican to pick up a crucial Senate seat.

In the meantime, President Joe Biden and other party leaders would face pressure to back the Democratic challenger — potentially Representative Ruben Gallego — even as they rely on Sinema for control of Senate committees and votes for judicial and other nominees.

“If she runs as an independent, she makes it that much harder, but not impossible, for a Democrat to win,” said Emily Kirkland, a senior adviser to the Change for Arizona PAC, which was organized to help defeat Sinema in a Democratic primary.

Sinema’s decision could have national implications for Democrats, who face a particularly tough 2024 map. There will be 34 Senate seats on the ballot in 2024, 20 of them now held by Democrats, plus Sinema’s and those of two other independents who caucus with Democrats. Several incumbent Democrats will be running in GOP-leaning states, including West Virginia, Montana and Ohio.

But Sinema’s decision to leave the Democratic party in which she has become an outlier, may be her own best hope for political survival. Kirkland said Sinema “was facing an incredibly tough Democratic primary.” However, if she managed to win in 2024, that would be a better outcome for Democrats than a Republican victory.

Recent surveys by AARP and polling firm Civiqs have also shown Sinema with poor approval ratings, particularly among Democrats. The Civiqs poll, taken shortly before the November midterm elections, put her approval rating at just 7% in her own party and 20% overall.

In announcing her decision, Sinema appealed to other independents in the state.

“A growing number of Arizonans and people like me just don’t feel like we fit neatly into one party’s box or the other,” she told CNN. “And so, like many across the state and the nation, I’ve decided to leave that partisan process and really just focus on the work that I think matters to Arizona and to our country.”

While Sinema hasn’t announced plans to seek reelection, many expect her to do so, including Max Fose, an Arizona Republican political consultant who is close to Sinema. He said her decision is in line with her 2018 message of being an independent voice for the state.

“What people don’t realize is that Arizona really is independent,” he said.

Chuck Coughlin, a veteran GOP strategist in Phoenix who became an independent in 2017, sees Sinema appealing to the broader general election electorate. “That’s a much better audience for her,” he said.

Gallego wasted no time hinting at a run in a statement Friday slamming Sinema for abandoning the party.

“Whether in the Marine Corps or in Congress, I have never backed down from fighting for Arizonans,” Gallego said. “And at a time when our nation needs leadership most, Arizona deserves a voice that won’t back down in the face of struggle.”

Sinema angered the Democratic base by opposing higher tax rates on the wealthy and corporations sought by Biden, and refusing to support nixing the filibuster to raise the minimum wage and enshrine voting rights and abortion rights.

She also has eschewed Democratic party lunches, spending much of her time with Republicans in her basement hideaway.

Her unorthodox moves have paid off, however, with a string of bipartisan victories with her at the center, including Biden’s bipartisan infrastructure law, legislation protecting same-sex marriage and the first significant gun control measure in many years.

Despite Democratic Senator Mark Kelly’s recent victory there, as well as Democratic wins for governor and other offices, Arizona is still predominantly Republican. It was 42% Republican, 34% Democrat and 24% other in the last election cycle, Coughlin said.

“Historically the way you win an Arizona election is you hold 85% to 90% of your own party, and then you win a plurality of the unaffiliated voters because they become the swing vote,” Coughlin said. “And this model flips that on its head and I think what Sinema’s thinking now is can I win 40% of Democrats and 40% of Republicans and 60% of unaffiliated voters.”

He said Sinema could pull it off. “She’s better positioned than anybody else to do that. It’s incredibly hard, though.”