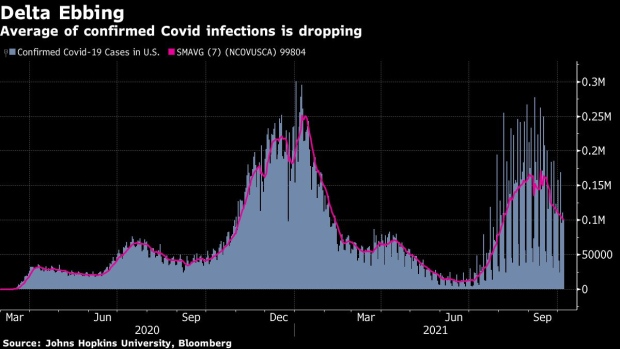 Customers sit at socially distanced tables outside a restaurant in Singapore, on Monday, June 21, 2021. Singapore has decided to scale down its reopening plans amid dozens of new cases over the last week, even as some countries with similarly high rates of vaccination allow a resumption of social activities and freer travel. Photographer: Wei Leng Tay/Bloomberg , Bloomberg

Singapore Prime Minister Lee Hsien Loong said that Singapore can’t stay “locked down and closed off indefinitely,” urging people to push ahead with the strategy of living with Covid-19 in a televised address that came as new cases continue to hit records.

Officials also announced plans to establish vaccinated travel lanes with nine more countries including the U.S. and U.K., meaning travelers don’t have to quarantine. The city-state has reported more than 3,000 new infections for four days in a row this week.

The Australian state of Victoria posted another day of record cases, even as it prepares to remove restrictions. The state saw 1,965 new infections on Saturday as the delta outbreak shows no signs of slowing. The state government is still planning to ease restrictions later this month when vaccination thresholds are reached.

The health ministry also plans to gradually expand vaccinations to children under 12, the report said. Vietnam has fully vaccinated about 13% of its population of 98 million, according to the health ministry.

Singapore will allow vaccinated travel to and from nine more countries without having to quarantine. The countries to qualify are the U.S., the U.K., Canada, Denmark, France, Italy, the Netherlands and Spain, which start from Oct. 19., and South Korea from Nov. 15, the government said Saturday.

Singapore Prime Minister Lee Hsien Loong said in a televised address that Singapore can’t stay “locked down and closed off indefinitely,” pushing ahead with the strategy of living with Covid-19 despite a record surge in cases.

Singaporeans need to “respect Covid-19, but we must not be paralyzed by fear,” Lee said, painting a picture of a “new normal,” possibly after three to six months, where Singapore will ease off restrictions, have light social distancing measures in place and cases come down to hundreds a day.

The U.S. will accept the use of Covid-19 vaccines that are approved by the World Health Organization or U.S. regulators for international travelers, Reuters reported, citing the Centers for Disease Control and Prevention.

The U.S. announced last month that it would allow entry to most foreign air travelers if they are fully vaccinated, but did not specify at the time which vaccines would be accepted.

Indonesian President Joko Widodo has ordered the acceleration of vaccination, testing and tracing in the tourist island of Bali ahead of its reopening to international travelers on Oct. 14.

Jokowi, as the president is known, urged the local government to target regencies where testing and tracing have fallen behind, as well as reach remaining areas to finish vaccine roll-outs. As of Friday, more than 98% of Bali’s population has received the first dose, while over 80% have completed their second shots, he said in a statement.

Thailand reported 10,630 new Covid-19 cases and 73 deaths in the past 24 hours. That was the lowest number of fatalities since July 26, as the government has accelerated its vaccination program. At least 70% of the population in Thailand will receive two doses of vaccine by the end of December, Permanent Secretary of Public Health Kiattiphum Wongrajit said on Thursday.

New Zealand recorded 34 new cases in the community, 31 of them in Auckland, the public broadcaster reported Saturday. That’s down from 44 infections the previous day.

No new cases were detected in Northland, which entered tougher restrictions from midnight after a infection was detected in the region, RNZ said.

The Australian state of Victoria posted another record of daily cases, even as it prepares to remove restrictions that have made Melbourne one of the most locked down cities in the world.

Victoria reported 1,965 new infections on Saturday and five more deaths, with the delta outbreak showing no signs of slowing and placing pressure on the state’s hospital system. After ordering lockdowns six times since the pandemic began for a total of around 250 days, the state government is still preparing to ease restrictions later this month when vaccination thresholds are reached.

Meanwhile, Australia’s most populous state of New South Wales recorded 580 new infections and 11 deaths on Saturday. While authorities say they have detected a different strain of the delta variant in western Sydney, they added it didn’t seem to be more transmissible or cause more illness than the original strain.

A snow leopard died after displaying symptoms similar to Covid-19 at a U.S. zoo housing a confirmed case of the virus, officials announced Friday.

Baya, age 2 1/2, exhibited signs of a cough followed by “inappetence and lethargy” and died Thursday, according to the Great Plains Zoo in Sioux Falls, South Dakota. One of the zoo’s Amur tigers tested positive this week, the zoo said.

Advisers to the Centers for Disease Control and Prevention have scheduled two upcoming meetings. The first, on Oct. 20-21, will discuss Covid-19 vaccine boosters for Moderna Inc. and Johnson & Johnson. The second, on Nov. 2-3, will focus on pediatric Covid-19 vaccines.

The Advisory Committee on Immunization Practices posted notice of the meeting on its website on Friday. The panel of outside experts advises the CDC on how best to administer new vaccines.

White House Covid-19 adviser Anthony Fauci has said he hopes a Food and Drug Administration emergency use authorization for Pfizer’s vaccine for children ages 5 to 11 will come by Halloween.

Deaths in Russia linked to Covid-19 in August grew to 49,389, adding to a surge in fatalities that’s taken the overall total to nearly 420,000 since the start of the epidemic.

The number of deaths associated with the virus was more than double the 23,877 announced in daily reports by the government’s Covid-19 task force. The Federal Statistics Service, which published the data late Friday, also revised up the record-high total reported in July to 51,044.

Iceland is joining its Nordic peers in halting inoculations with Moderna Inc.’s Spikevax shot on concern over side effects.

The Moderna shot, which has mostly been used in Iceland for second doses, won’t be used until more information over its safety has been collected, the chief epidemiologist said on Friday.

Sweden, Denmark and Finland have this week suspended the shots for younger people because of the risk of heart inflammation as a potential side effect.

The seven-day average of U.S. cases dropped below 100,000 for the first time since August, another sign the wave fueled by the delta variant is retreating. Infections are down about 42% from the peak of this wave.

The daily death toll is still high -- averaging 1,762 as of Thursday -- but at the lowest in almost a month. The average for infections was 99,804 as of Thursday, the lowest since Aug. 5, according to data compiled by Johns Hopkins University and Bloomberg.

More than 44 million Americans, or about 13% of the population, have contracted the virus so far, and more than 710,000 have perished.

Starting next week, vaccine clinical trial volunteers will be offered additional approved doses to ensure that they are able to travel to abroad, the U.K.’s Department of Health said.

While the U.K. recognizes participants in trials as fully vaccinated, many other countries do not, and require visitors to be inoculated with an approved vaccine.

Denmark will offer the vaccine from Moderna Inc. to children under the age of 18 after all, the Danish Health Authority said, reversing a previous statement.

On Wednesday, the authority had announced it would stop offering the jab to those under that age, citing new data indicating an increased risk of heart inflammation.