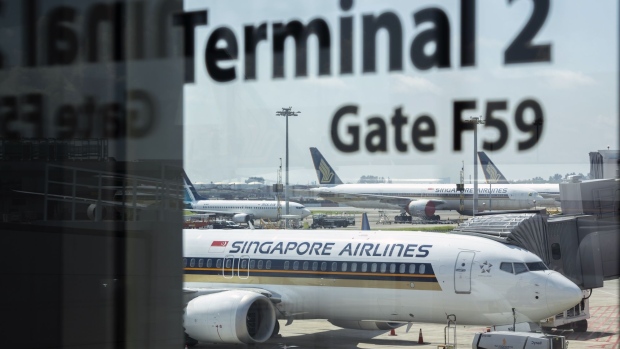 A Boeing Co. 737 Max 8 aircraft, operated by Singapore Airlines Ltd., at the JetQuay CIP Terminal of Changi Airport in Singapore, on Tuesday, Nov. 16, 2021. Singapore Airlines unveiled its first new cabin offering in more than three years after spending S$230 million ($170 million) on the design and installation of seats on its 154-seat Boeing 737 Max planes. , Bloomberg

(Bloomberg) -- Indonesia and Singapore has settled a dispute over airspace and signed an extradition deal after years of disagreement.

Singapore Prime Minister Lee Hsien Loong and Indonesian President Joko Widodo witnessed the signing of a treaty on extradition of fugitives as well as a memorandum of understanding on the flight information region on Tuesday. That means Indonesia will control all airspace within its territory, including over Riau and Natuna islands, Jokowi said.

The agreements conclude years of debate between the two neighboring countries. In 2015, Jokowi started pushing to reclaim the airspace over the islands, which has been managed by the city-state since 1946. The area serves as a corridor for flights in and out of Singapore’s Changi airport, one of the busiest in Asia.

Indonesia has sought an extradition treaty with Singapore since 1998 in a bid to bring corruption suspects who flee to the city-state back home to face court, Indonesia’s law ministry said in a Tuesday statement.