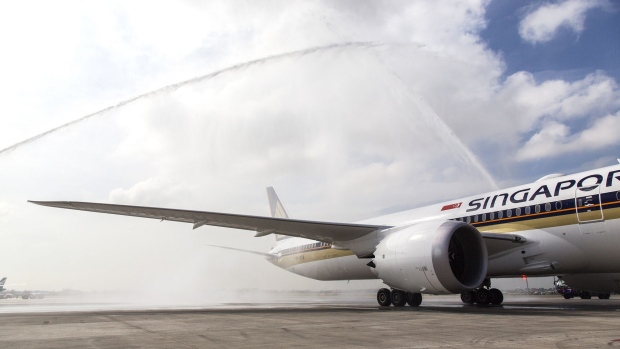 A Boeing Co. 787-10 Dreamliner aircraft, operated by Singapore Airlines Ltd., receives a water cannon salute as it arrives at Changi Airport in Singapore, on Wednesday, March 28, 2018. In May, Osaka and Perth will be first scheduled destinations for the airline's new 787-10s. , Bloomberg

(Bloomberg) -- Singapore Airlines Ltd. is converting some of its Boeing Co. jetliner orders to a new, larger model after an agreement with the planemaker to defer deliveries.

The airline will swap 14 of its existing commitments for Boeing 787-10 jets to 11 777-9s, increasing its order for the so-called 777X in development to 31, Singapore Airlines said in a statement Thursday. The move will result in a deferment of more than S$4 billion ($3 billion) in capital expenditure that would have gone to both Boeing and Airbus SE, it said, without giving any detail on Airbus orders that had been deferred earlier.

Carriers around the world are pushing back on the delivery of aircraft after the pandemic destroyed travel demand and saw thousands of planes grounded. Singapore Airlines has been hit harder than its rivals because it doesn’t have any domestic market on which to rely upon.

With the latest agreement, Singapore Airlines’ expenditure on aircraft will fall every year until March 2024. For the year ending in March this year, its spending will drop to S$2.8 billion from S$5 billion.

The added orders are a shot in the arm for the beleaguered 777X. The aircraft has suffered multiple delays in its entry to service, and Boeing took a $6.5 billion charge on the program in its latest earnings. The U.S. company said about a third of the jet’s order haul was at risk because the latest setback.

Covid-19 has crushed demand for twin-aisle aircraft built to cruise across oceans, and orders for wide-body jets such as the 777X, Boeing’s 787 Dreamliner and competing Airbus models are expected to be the last to recover from the slump.