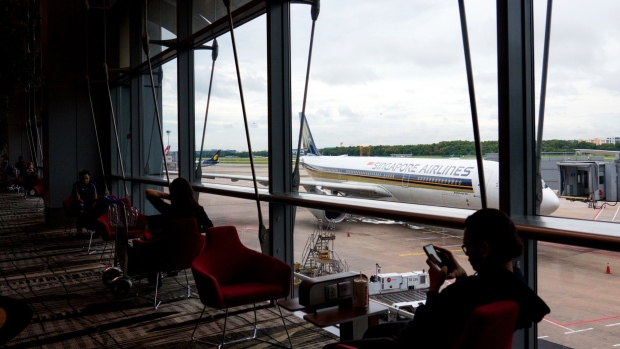 A Singapore Airlines Ltd. aircraft stands on the tarmac as travelers wait at Terminal 3 (T3) of Changi Airport in Singapore, on Thursday, Dec. 13, 2018. Singapore's Changi Airport, voted the world's best for the past six years by Skytrax, is pursuing that goal of extensive automation with such vigor that it built Terminal 4 to help test the airport bots of the future. Photographer: Nicky Loh/Bloomberg , Bloomberg

Singapore Airlines Ltd. is planning so-called flights to nowhere -- trips that start and end at the same airport -- in an attempt to boost its grounded passenger business, the Straits Times reported Friday, citing unidentified people.

The flights from Changi airport are slated to take place by the end of October and may be bundled with staycations at the city’s hotels, shopping vouchers and limousine ferry rides, according to the report.

Stricter travel rules to control the spread of COVID-19 pandemic have battered the aviation industry worldwide, with carriers such as Singapore Airlines hit particularly hard because they don’t operate domestic flights. The International Air Transport Association doesn’t expect passenger traffic to recover to pre-pandemic levels until 2024.

Singapore Airlines isn’t the first to offer trips whose destination is the airport from which it departed. Last month, Japan’s ANA Holdings Inc. sold tickets for a charter flight to nowhere, while two Taiwan carriers launched similar campaigns -- Starlux Airlines introduced a “pretending to go abroad” journey and EVA Airways Corp. filled all 309 seats on a special Father’s Day flight.

Singapore Airlines’ plan comes after a survey by Singapore Air Charter showed 75 per cent of the 308 participants were willing to buy tickets on these types of flights, according to the Straits Times report.

Singapore’s flag carrier said on Thursday that it is eliminating 20 per cent of its workforce despite raising about $11 billion (US$8 billion) through loans and a rights issue in June, and receiving aid from a government job-support program.