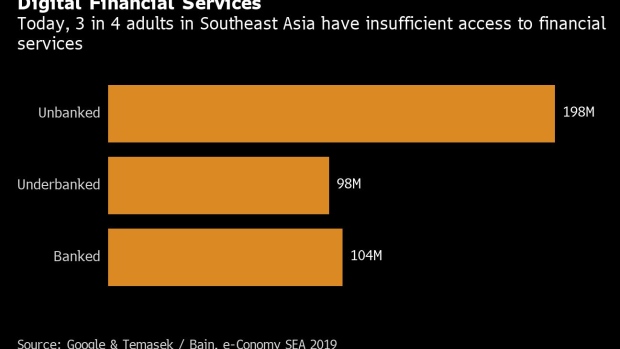 (Bloomberg) -- FinAccel Pte, which extends credit to online shoppers in Indonesia under the Kredivo brand, has raised $90 million of expansion capital in a fundraising round valuing the company at almost $500 million.

Kredivo allows online shoppers to apply for a loan through a mobile app and get approval in minutes if they qualify. The app uses customers’ personal data and machine learning technologies to determine eligibility. Similar to credit cards, Kredivo starts charging interest on credit it extends to customers after 30 days, though its rate is a higher 2.95% per month, or more than 40% annually, for a revolving loan.

“Our goal is to create a generation of financially savvy individuals and lend to them at competitive interest rates,” he said in an interview. “The goal here is not to be a loan shark. This is about financial inclusion for the masses.”

Southeast Asia, a region that houses more than 600 million people, is rapidly warming to online lending because more than 70% of the adult population is neglected by traditional banks, according to a study by Bain & Co., Google and Temasek Holdings Pte. Of the 400 million adults in the region, 98 million are “under-banked” -- people with bank accounts but limited access to services such as credit. Another 198 million have little recourse to finance whatsoever.

Since its inception three years ago, FinAccel has evaluated 3 million applications and disbursed almost 30 million loans, according to the firm. The Mirae Asset-Naver Asia Growth Fund is a joint venture between Mirae Asset Financial Group and Naver Corp., it said.

To contact the reporter on this story: Yoolim Lee in Singapore at yoolim@bloomberg.net

To contact the editor responsible for this story: Edwin Chan at echan273@bloomberg.net