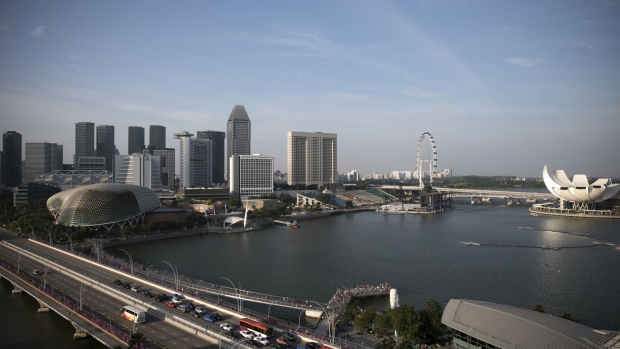 Commercial and residential buildings stand in Singapore, on Monday, June 11, 2018. President Donald Trump is about to see whether his bet on North Korea will pay off: that Kim Jong Un's desire to end his country's economic strangulation and pariah status will prevail over the dictator's fear of relinquishing his nuclear threat. Photographer: Brent Lewin/Bloomberg , Bloomberg

(Bloomberg) -- Singapore has made it easier for investment firms to register funds locally, as the city-state strives to increase its allure as a financial hub.

A new law, which came into effect Tuesday, encourages asset managers to domicile their funds in Singapore by allowing the creation of a single structure to hold a pool of assets and multiple sub-funds, and offering greater confidentiality.

While many asset managers have offices in Singapore, most of their funds are still registered in offshore jurisdictions. The new rules offer investors greater flexibility, and can be used for both traditional and alternative strategies.

The move is part of government efforts to build on Singapore’s traditional strength as a financial center and reduce the economy’s reliance on more volatile sectors such as trade. The city’s asset-management industry grew more than 5% to S$3.4 trillion ($2.5 trillion) in 2018, according to the Monetary Authority of Singapore.

At the same time, the city-state is set to benefit from months of unrest in its long-time regional rival, with more Hong Kong-based asset managers inquiring about opening offices in Singapore.

The new law, known as the Variable Capital Companies Act, is “another salvo in the island republic’s efforts to further promote Singapore as both an asset-management and fund-domicile hub,” said Daniel Yong, a partner at law firm Withers KhattarWong LLP.

The framework has been launched alongside a pilot program involving about 20 funds, according to Mark Voumard, chief executive officer at Gordian Capital Singapore Ltd. Gordian, a fund platform, was part of the test and will launch a sustainable investment fund in partnership with GoImpact Capital Partners this quarter.

The pilot program is acting as a litmus test for global funds interested in being based in Singapore. The new framework complements Singapore’s existing legal structures of limited partnerships, private companies and unit trusts.

“You can only run a VCC if you’re in Singapore so it becomes a virtuous circle” that will attract more managers, Voumard said.

To contact the editors responsible for this story: Lianting Tu at ltu4@bloomberg.net, Peter Vercoe, Candice Zachariahs