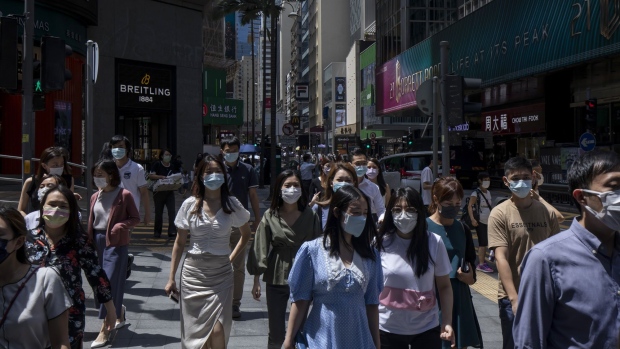 People walk along a street during lunch hour in Central district in Hong Kong, China, on Wednesday, Aug. 18, 2021. Hong Kong is caught between its desire to reopen and the government's zero tolerance for any cases of Covid-19, which has kept the virus out for most of the pandemic. , Bloomberg

(Bloomberg) -- Covid-19 infections rose to a record in Singapore, where the increased spread of the virus despite a high vaccination rate is sowing a rare disquiet in the ruling party. In Japan, authorities are lifting a state of emergency at the end of the month as cases drop.

A travel warning for Hong Kong was raised in error on Monday, the U.S. Centers for Disease Control and Prevention said, adding the city still has a low level of the disease. Pfizer Inc. and BioNTech SE came a step closer to bringing their vaccine to school-age children in the U.S.

European nations dominate the top of Bloomberg’s Covid Resilience Ranking for a third month, with Ireland taking the lead after a startling turnaround. At the same time, confirmed cases reached a record in Romania, which has the lowest vaccination rate in the European Union after Bulgaria.

Wells Fargo & Co., the U.S. bank with the most employees, delayed its return-to-office date to Jan. 10.

The U.S. Centers for Disease Control and Prevention mistakenly changed its travel advisory on Hong Kong on Monday and has corrected the error on its website, a spokesperson for the agency told Bloomberg News. Hong Kong remains at Level 1 with a low level of Covid-19. The CDC raised Singapore to a Level 3 on Monday, citing a high level of Covid-19.

Covid-19 hospitalizations are still setting records across Idaho, where health care is being rationed and no end to the crisis is in sight, officials said Tuesday. “We do not see where this is going to turn around just yet,” David Jeppesen, director of the state Department of Health and Welfare, said during an online briefing.

Wells Fargo & Co. will delay its return to office until Jan. 10. The bank had previously set a Nov. 1 date.

People who got Covid-19 vaccine boosters after the shots were cleared for people with weakened immune systems had mostly mild to moderate reactions, according to the U.S. Centers for Disease Control and Prevention.

Some 22,191 booster recipients registered with a federal monitoring system starting Aug. 12, when the doses were first authorized on an emergency basis by U.S. regulators, to Sept. 19, the CDC said in a report on Tuesday. The data were reported by the shot recipients 0 to 7 days after getting the third dose.

New York City Mayor Bill de Blasio hailed vaccine mandates following a court panel decision on Monday that the city could proceed with a vaccine requirement for teachers and other education workers. Workers at the largest U.S. school district have until Friday at 5 p.m. to get their first Covid shot or get placed on unpaid leave. Principals will have the weekend to find substitute teachers so that “by Monday morning, 100% of staff will be vaccinated,” de Blasio said during a briefing.

New York Governor Kathy Hochul said a Covid-19 vaccine mandate for health workers that went into effect this week is working to boost vaccination rates, providing a road map to other states that are trying to fight the highly transmissible delta variant.

About 92% of nursing home staff in New York had received at least one vaccine dose as of Monday evening, up from 70% on Aug. 15, before the vaccine mandate was announced, according to the governor’s office. And 84% of hospital staff were fully inoculated as of Sept. 22, up from 77% on Aug. 10, according to state data.

Health-care workers statewide were required to get at least their first dose of the vaccine by Sept. 27, as the state continues to battle a rise in Covid cases, especially among unvaccinated people. Those who refuse the shot or who don’t receive an exemption face termination.

Airlines are cautiously adding capacity between the U.S. and Europe over winter, as carriers try to capitalize on looser travel restrictions without over-stretching during the seasonally slower months.

The number of flights from Western Europe to North America is poised to jump by 7.5% between late October and early November, when the U.S. ban lifts on visits from most European countries, based on data from BloombergNEF. Traffic will then head for a peak in late December.

Perella Weinberg Partners told its bankers to be back in the office most weekdays starting Nov. 1, with some flexibility remaining in when and where they work.

The Danish Health Authority said it expects to offer an extra vaccine to people older than 65, health workers, people with chronic diseases and anyone who initially received the shot from Johnson & Johnson. The rollout will be completed with vaccines from either Pfizer/BioNTech or Moderna pending regulatory approval.

Pfizer Inc. and partner BioNTech SE said they submitted initial data to U.S. regulators about the use of their vaccine in children ages 5 to 11, coming a step closer to bringing shots to school-age kids.

The companies expect to make a formal request for emergency authorization in the coming weeks. Submissions to regulators in Europe and elsewhere are also planned.

Romania reported a record number of daily infections. More than 11,000 new cases were recorded in the past 24 hours, data released Tuesday showed. Large cities including Bucharest are approaching infection rates that will lead to new restrictions, including a weekend curfew and online schooling.

The country has the second-lowest rate of vaccination in the European Union after Bulgaria. With the government struggling to boost the number of intensive-care beds available for virus patients, another 208 deaths were also reported since Monday. That brings total fatalities to more than 36,000, with the worst toll coming in the past three months.

European nations dominate the top rungs of Bloomberg’s Covid Resilience Ranking for a third month, and Ireland has taken over pole position after a steady recovery from the worst outbreak at the start of 2021. With more than 90% of the adult population fully vaccinated, the country has been scrapping restrictions this month.

Ireland used a strategy common across Europe that’s emerging as a global model of success: largely limiting quarantine-free international travel to the immunized helps hold down serious illness and death even as infections spread; allowing some domestic freedoms only for inoculated people drives up the local vaccination rate.The U.S. dropped three spots to No. 28 in September as unfettered normalization, regardless of vaccination status, drove a surge in cases and deaths. Inoculation has hit a wall, with places that started shots later than the U.S. now overtaking it. Southeast Asian economies continue to populate the Ranking’s bottom rungs in September, with Indonesia, Thailand, Malaysia, Vietnam and the Philippines the last five.

Japan will lift a state of emergency at the end of September as new infections recede. Prime Minister Yoshihide Suga said he would end the restrictions Friday for Tokyo and 18 other areas that make up about 75% of Japan’s economy.

His government is looking to roll back curbs gradually that called on places like eateries and pubs to close early and restricted sales of alcohol.