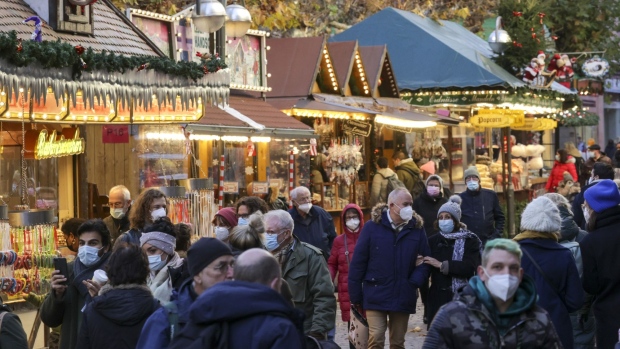 Members of the public wait in line outside a Covid-19 quick test center (QTC) set up in the Chinatown area of Singapore, on Tuesday, Sept. 28, 2021. Singapore’s Finance Minister Lawrence Wong said earlier this week that the country is committed to reopening, and that recently reimposed curbs are to ensure the health system can handle an increased number of daily cases. Photographer: Lauryn Ishak/Bloomberg , Bloomberg

(Bloomberg) -- Singapore cases rose but the country’s health minister said a high vaccination rate and growing natural immunity could protect it from surges currently engulfing Europe and the U.S.

In Hong Kong, Morgan Stanley is offering to reimburse employees as much as HK$40,000 ($5,100) for quarantine expenses related to the financial hub’s zero-Covid strategy.

Lawmakers from the U.S. hotspot of Michigan sought President Joe Biden’s help to control the outbreak. Biden’s vaccine mandate for government workers has led to about 92% of the federal workforce getting at least one Covid shot.

Europe, the pandemic’s epicenter once more, is debating new measures to curb the resurgence of the virus and avoid curfews and lockdowns. Options include shot mandates for some groups in Germany and restrictions for unvaccinated people in Italy.

Michigan has the highest per capita rate of Covid cases in the U.S., with hospitalizations reaching 4,080 as of Wednesday, approaching a record set in April 2020.

Trinidad and Tobago is experiencing its worst spike in Covid-19 cases, and at least five of its hospitals are at over 80% capacity, as case numbers rise across much of the Caribbean, the Pan-American Health Organization said. Trinidad and Tobago is just one of several Caribbean counties struggling with an uptick in infections, PAHO said.

While Central America saw a 37% reduction in new infections over the last week, in South America almost every country but Brazil, Suriname and Venezuela reported increased Covid rates, with the largest jumps occurring in Ecuador and Paraguay.

“These trends are telling,” PAHO Director Carissa Etienne said during a weekly press event. “Even though Covid cases have dropped significantly over the last few months, Covid transmission is still active across our region, so every time we lower our guard, the virus gains momentum.”

Pfizer Inc. alleged a “soon-to-be-former employee” uploaded thousands of files including documents with trade secrets regarding the company’s Covid-19 vaccine.

Chun Xiao (Sherry) Li allegedly uploaded more than 12,000 files including “scores” of documents with confidential information, according to a complaint filed in the U.S. District Court for the Southern District of California. The documents pertained to a broad range of topics including analysis of vaccine studies, operational goals, and development plans for new drugs.

Pfizer said in the complaint it believed Li was going to Xencor Inc. and that she provided “decoy” laptop when confronted about downloads.

About 92% of federal government employees have had at least one Covid-19 shot, according to data released by the administration following President Joe Biden’s vaccine mandate for the workforce.

An agency-by-agency breakdown of compliance rates on Wednesday showed a range of outcomes. Across the government, 92% of the estimated 3.5 million federal workers have at least one dose. About 4.5% -- more than 157,000 people -- either have requested or been granted exemptions from the mandate, the report also found.

The Agency for International Development has the highest vaccination rate, with 97.8% of its workforce receiving at least one shot, while the Department of Agriculture has the lowest, with 86.1%.

The country, which has one of the world’s highest vaccination rates with almost 90% of its adult population having received at least one jab, has introduced new restrictions to cope with the peak in confirmed cases.

On Wednesday, Denmark saw most daily new cases since December 2020, when the government introduced a winter lockdown of the economy. Two weeks ago, the country reintroduced a so-called corona passport, which means people have to prove vaccination, a negative test or immunity through previous contamination when attending public events. State workers will also have to present the passport to show up physically for work.

The government will need to get backing from a majority in parliament.

Oslo is recommending that face masks be used again in shops and public transport after a rise in infections in the Norwegian capital. A balance needs to be found between an open society and measures to limit infection, Governing Mayor Raymond Johansen told a meeting of the city council on Wednesday.

Olaf Scholz, who will succeed Angela Merkel as chancellor, said his coalition government would consider vaccine mandates for people who work with vulnerable groups. Scholz said his government, which is expected to be sworn in in early December, will do everything to fight the pandemic.

Merkel asked members of the new coalition to impose a two-week lockdown but officials refused, according to a report by the newspaper Bild.

The number of infections in the country rose to a record 66,884, and the seven-day incidence rate per 100,000 people climbed above 400 for the first time, according to the latest data from the RKI public-health institute.

The nasal version is still in clinical tests and hasn’t been approved by regulators. Putin, 69, also received an injected booster of the locally developed Sputnik Light a day earlier.