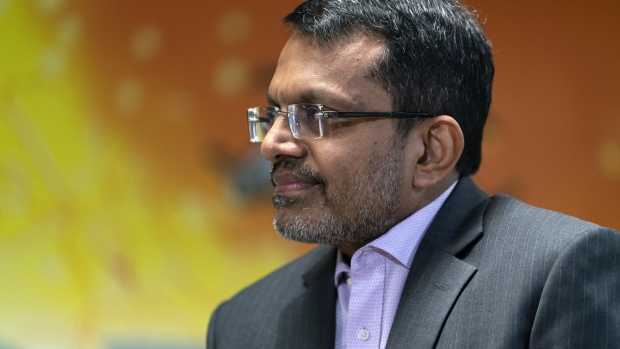 (Bloomberg) -- In the last few weeks, the managing director of the Monetary Authority of Singapore has gained attention for his personal views on some politically charged topics, echoing a similar evolution among his central banking peers as they address the world beyond money supply.

In a series of recent lectures as a visiting scholar at a local university’s think tank, Ravi Menon has tackled several top issues facing policy makers both in the city-state and globally: a possible wealth tax and minimum wage to address inequality; the economic case for foreign labor and immigration; and the need for a higher carbon tax to meet climate change commitments.

It would have seemed unusual during past crises to hear a central bank chief weigh in on prescriptions for such hotbed issues. The pandemic era, however, has seen central bankers globally become more vocal on social issues, even embedding climate change mitigation into their missions and expanding their traditional toolkits amid record-low interest rates.

In the aftermath of the global financial crisis, for instance, former Federal Reserve Chair Janet Yellen often cited economic mobility as a critical issue, but lamented there was little central bankers could do. Her successor, Jerome Powell, has sharpened the Fed’s focus on the topic, and has spoken extensively on issues like minority unemployment with an eye toward how the Fed can help the government’s goals.

In Menon’s case, he’s careful to emphasize that his four lectures at the Institute of Policy Studies at the National University of Singapore’s Lee Kuan Yew School of Public Policy -- the last of which will be Wednesday -- reflect his personal views, not that of the MAS or the Singapore government.

“There are many central bankers who have been quite forthcoming and vocal on the international stage, which add to the intellectual debate and policymaking,” said Selena Ling, chief economist at Oversea-Chinese Banking Corp. in Singapore, citing Agustin Carstens and Mark Carney, the respective former heads of central banks in Mexico and England. “There should be no constraint on offering informed ideas, or debating and challenging the status quo if it adds to the richness of the debate and robustness of policymaking.”

Eugene Tan, a political analyst and law professor at Singapore Management University, said Menon’s comments may reveal the inner thoughts of parts of the Singapore establishment, given that Menon himself has mentioned in his lectures that his views are also shaped by discussions with colleagues.

“It could signal the government’s evolving position and the imperative to adapt policies such as the minimum wage and wealth tax to fit the local context,” Tan said. Menon could also be using the lectures as a platform “to nudge his colleagues to keep an open mind about those issues and to push the boundaries on what is possible,” he said.

Menon’s comments on climate change track its rising prominence within the MAS, which earlier this year launched its first sustainability report. But other topics, particularly immigration and wages, have recently been the subjects of parliamentary debate.

Menon, for instance, is the most high-profile civil servant in recent years to publicly support a possible wealth tax and minimum wage. This contrasts with the ruling People’s Action Party, which has dominated Singaporean politics since independence, as it hasn’t really endorsed them.

Deputy Prime Minister Heng Swee Keat told Parliament in February that there’s scope to study a wealth tax, but that the government needs to balance being progressive and staying competitive, and that growing the economy is “the most sustainable way to generate revenue and raise our standards of living.”

The PAP also has long argued a minimum wage could leave the lowest-skilled and most vulnerable workers at a disadvantage, as it would be difficult to set the right value, and that the policy could be politicized. Instead, it introduced the so-called progressive wage model, which targets sectors like the cleaning industry and allows workers to earn higher salaries as they upgrade skills.

Menon’s lectures appear to be laying the groundwork for him to become a key thought leader in Singapore, said Nydia Ngiow, Singapore-based senior director at BowerGroupAsia, a strategic policy advisory firm, and could possibly even pave the way for an entry into politics. “He is very much in the mold of a PAP candidate from the civil service,” she said.

The PAP has often brought prominent technocrats into its fold. Menon’s predecessor, Deputy Prime Minister Heng, joined the People’s Action Party after leaving the MAS. He was ultimately anointed the successor to Prime Minister Lee Hsien Loong before bowing out earlier this year, citing his age.

Menon said in a response to questions from Bloomberg that he “has absolutely no intention to enter politics.”

As he was speaking in an academic capacity, “we shouldn’t make a big deal of the fact that it’s the central bank governor who made these suggestions,” said Donald Low, a former senior civil servant who has argued for a wealth tax and is now a professor at the Institute of Public Policy of the Hong Kong University of Science and Technology.

“That politicians or political parties in Singapore have staked out positions on some of these issues does not mean that the rest of us cannot discuss them in a non-partisan, technocratic, evidence-based way with a view toward improving public policies,” he said.