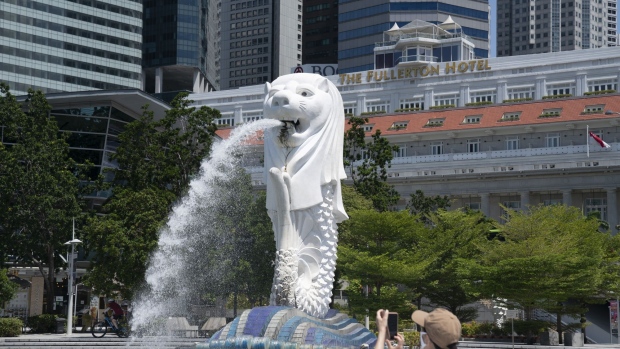 The Merlion Statue stands by Marina Bay in a near-empty Merlion Park in Singapore on Monday, July 6, 2020. Prime Minister Lee Hsien Loong vowed to hand over Singapore “intact” and in “good working order” to the next generation of leaders, predicting the coronavirus crisis will “weigh heavily” on the nation’s economy for at least a year. , Bloomberg

Singapore is appealing to its travel-hungry residents to support a battered hospitality sector in a bid to limit job losses.

The city-state is launching a S$45 million ($33 million) domestic travel campaign called SingapoRediscovers, its biggest ever to spur local spending, the Singapore Tourism Board said Wednesday. The campaign includes staycations and dining offers, as well as curated tour packages over a nine-month period.

Singapore is hoping to avoid major job losses after its borders closed to foreign tourists in March due to the coronavirus pandemic. Travel-related sectors, which contribute about 4% of Singapore’s gross domestic product, have exerted the “largest drag on economic growth,” the central bank said last week. Already, one of Singapore’s largest hospitality employers, Resorts World Sentosa, has cut jobs.

“We do not expect domestic consumption to fill the hole left by the diminution of international travel,” Singapore Tourism Board Chief Executive Officer Keith Tan said. “What we hope to do is to buy as much time for as many businesses as possible to survive until a vaccine is found or when international travel resumes.”

Tourism in Singapore will ultimately resume with higher-quality travelers considering most nations are re-starting business travel first, Trade and Industry Minister Chan Chun Sing said at a briefing Wednesday. Some products and services will have to be tweaked to cater to that demand.

“It will be a quality and not a quantity game,” Chan said. He added that the domestic market has a lot of potential. Singaporeans spent more than S$34 billion on overseas travel in 2018 versus around S$27 billion in national tourism receipts.

More than 19 million tourists flocked to the city-state last year, spending almost S$28 billion. The island’s latest campaign, in a similar vein to Step Out Singapore after SARS in 2003, is much smaller than those in countries like Thailand and Japan. It also eschews direct subsidies for trips that other nations have adopted.

While Tan didn’t rule out such an approach, he said the campaign should be seen in the context of the government’s four previous stimulus packages, which amount to almost S$100 billion.

SingapoRediscovers draws from S$90 million set aside in an earlier budget for the travel industry’s recovery, as well as the operating budgets of three other agencies, although no breakdowns were given.

New daily virus cases in Singapore are still in the triple digits, although the numbers have come down and the majority are in foreign-worker dormitories. A resurgence of infections in places like Hong Kong and Australia have dimmed hopes of international tourists returning any time soon. A survey conducted in June found that close to 70% of respondents listed safety as a priority when considering a local holiday.

Around 80 hotels have been allowed to offer staycation packages, although over half of Singapore’s 67,000 hotel rooms are currently being used for Covid-19 quarantine purposes.

Some of the experiences on offer include staycations on Sentosa island, some complete with a spa visit and others with a sailaway that’s priced from S$1,499 per night. There are also discounts on attractions including a bungy jump, cable car rides and various beach clubs.