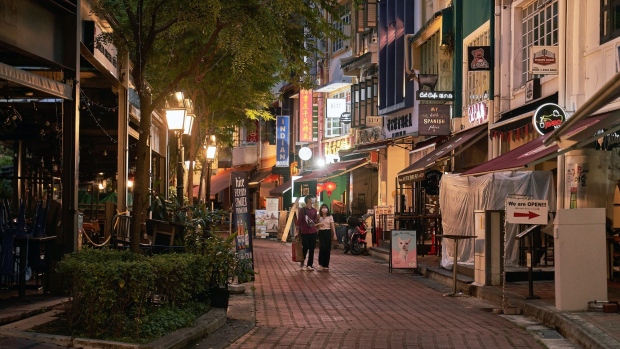 Pedestrians walk along a deserted street in the deserted Boat Quay area of the central business district of Singapore, on Wednesday, May 19, 2021. A new wave of infections has forced the Southeast Asian nation back into lockdown-like conditions it last imposed a year ago, banning dining-in at restaurants and limiting gatherings to two people. , Photographer: Bloomberg/Bloomberg

(Bloomberg) -- Singapore is stepping up its investigation of new Covid-19 cases in karaoke lounges, as it seeks to control an emerging cluster linked to the social hostesses who frequent the establishments.

The premises will be closed for two weeks to allow for deep cleaning and special testing operations will be conducted for all staff, the Ministry of Health said in a statement late Tuesday. Free Covid-19 testing will also be extended to the public who had frequented these places, or who interacted with the hostesses in any setting over the last two weeks.

While Singapore’s daily local coronavirus infection tally hit the highest in nearly a month Tuesday, its overall case load remains low compared to western financial capitals. The 19 cases in the city-state work out to just over 3 per million. By contrast, New York City’s daily average over the last seven days is about 42 per million.

Singapore took a first step in rolling back restrictions with more people being allowed to dine together from Monday. Groups of five can now dine-in at food outlets from two previously. Dining-in was stopped briefly when Singapore experienced a flare-up in virus cases in May.

Government leaders have stressed vaccination as the key to reopening the trade hub. More than 70% of people in Singapore have had their first dose of vaccine, the 11th-highest rate in the world and the most in east Asia, according to the Bloomberg vaccine tracker.

Yet Singapore’s recent cluster shows the difficulty governments have had across Southeast Asia in trying to ensure that venues for nightlife entertainment don’t become hotspots for Covid transmission. Singapore had shuttered karaoke lounges and clubs early in the pandemic, though several have since reopened as food and beverage outlets. In April, authorities in Bangkok had to close down almost 200 nightlife venues after they emerged as the epicenter of a flare-up.