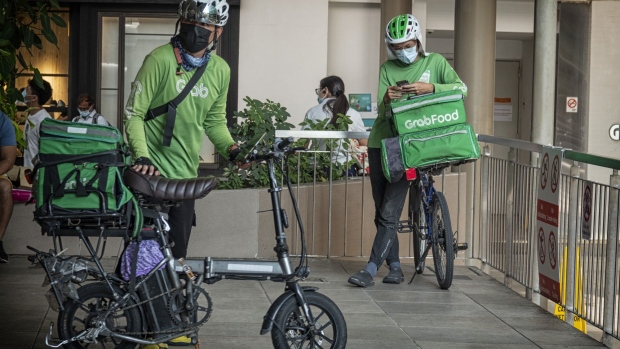 A GrabFood delivery rider in Singapore, on Wednesday, May 18, 2022. Grab Holdings Ltd., is expected to report results on May 19. Photographer: Bryan van der Beek/Bloomberg , Bloomberg

(Bloomberg) -- Singapore’s ride-hailing and food-delivery workers are set to gain more benefits like insurance and pensions, but the platform companies using them won’t need to treat them as full-time employees.

In a decision affecting companies such as Grab Holdings Ltd., GoTo Group, Delivery Hero SE’s Foodpanda and Deliveroo Plc, the government said Wednesday it accepted all 12 recommendations from a committee working on new standards for the gig economy. The new rules will require legislative changes and will become effective in the latter half of 2024 at the earliest.

While the new rules will guarantee more benefits to the workers, for instance in the case of injury, the cost increase for the platform companies will be limited because they won’t need to take them on as full-time employees. Shares of GoTo, the provider of the Gojek ride-hailing service, advanced 1.1% in Jakarta in early Thursday trading. Grab rose 1.4% in New York on Wednesday.

The move reflects the growing pressure on gig economy stalwarts such as Uber Technologies Inc. as governments around the world consider policy changes to raise wages or provide health-care to contract employees who don’t enjoy full-time benefits. Critics say that food-delivery companies like Grab, Foodpanda and Deliveroo -- which flourished during the pandemic -- have exacerbated social inequities by not properly rewarding their riders.

Last month, shares of Uber and Lyft Inc. tumbled after the Biden administration issued a proposal that could change the way it approaches workers’ employment status, a move that could upend the ride-hailing companies’ business models. In September, the European Commission set out new rules that would mean people working for food-delivery and ride-hailing apps can presume that they are an employee regardless of what they are called in their contract.