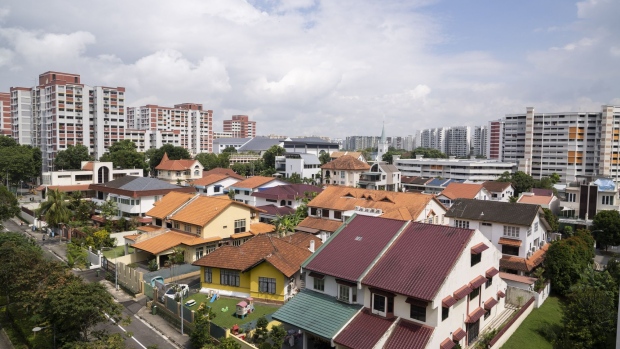 Private residential houses and Housing & Development Board (HDB) public housing estates in the Hougang area of Singapore, on Wednesday, Dec. 22, 2021. Singapore’s economic recovery is expected to slow to 3%-5% growth next year, from about 7% this year, according to the trade ministry. Still, most economists remain optimistic about the city-state’s growth prospects as local infections subside. , Bloomberg

Singapore authorities imposed property curbs on Dec. 16 for the first time since 2018 to cool a market that saw home prices surge the most in more than a decade. The measures include higher stamp duties for second-time home buyers and foreigners as well as tighter loan limits.

Sales may continue to slow in the first few months of 2022, according to Bloomberg Intelligence. But the cooling measures may end up being a short-term fix in a market with an insatiable appetite for homes, with analysts previously saying they expect transactions to rebound as early as the second half of the year.