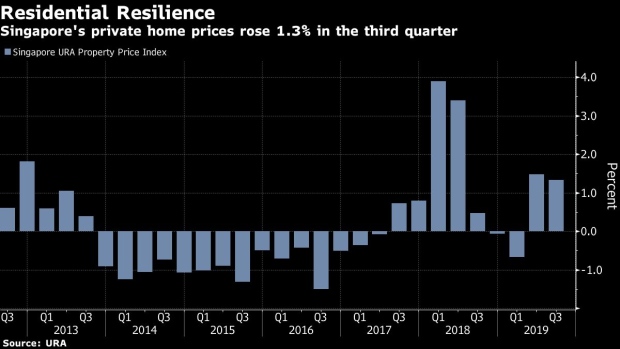 A woman walks through a Housing & Development Board (HDB) public housing estate in the Toa Payoh district of Singapore, on Friday, April 5, 2019. Singapore's aging public housing has been a source of anxiety, for home owners and the government alike. There may be some relief, however, with the government announcing new rules for those willing to buy older properties. Photographer: Bryan van der Beek/Bloomberg , Bloomberg

(Bloomberg) -- Sales of private apartments in Singapore rebounded in November amid concerns a property glut could halt a nascent price recovery.

The jump in transactions comes as Singapore grapples with an oversupply of almost 32,000 apartments -- some finished, others under construction and still more in the planning phase. The glut, which threatens to push down prices, has prompted home builders to call for an easing of cooling measures imposed in July 2018 to absorb the backlog. Some market watchers say that could take as many as four years to clear.

So far at least, the city-state’s private property market has shown resilience with home prices rising 1.3% in the three months ended Sept. 30.

To contact the editor responsible for this story: Katrina Nicholas at knicholas2@bloomberg.net