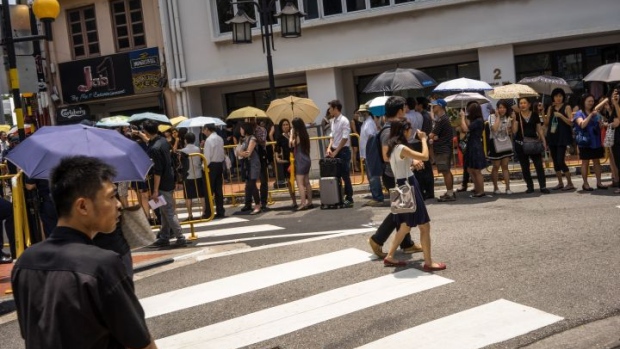 Mourners use umbrellas to shade themselves from the sun while waiting in line to pay tribute to the late Lee Kuan Yew, Singapore's first prime minister, as his body lies in state at Parliament House, in Singapore, on Wednesday, March 25, 2015. Singapore's government extended viewing hours for people to file past the coffin of Lee as thousands lined up in the city's midday heat.The line stretched across a mile mostly along the Singapore river through the financial district. Photograph: Sanjit Das/Bloomberg , Bloomberg

The 2010s set a record as the hottest decade in Singapore since temperature records began in 1929, with average temperatures last year nearly a full degree Celsius higher than the average for the three decades before it.

Temperatures in the city-state just north of the Equator have been above average for the last 23 consecutive months, according to an annual report released Thursday by the Meteorological Service Singapore.

It’s expected to get worse. Under a “business as usual” scenario, Singapore’s average surface temperatures are projected to rise between 2.9 and 4.6 degrees Celsius by the end of the century. Even assuming aggressive actions to control global emissions, Singapore should still prepare for at least 1.4 degree rise, according to the MSS’ most recent national climate change study.

Singapore’s Prime Minister Lee Hsien Loong has said the city-state may need S$100 billion ($74 billion) or more to protect against rising sea levels over the next century, and that climate change defense, like the country’s military, is “existential” for Singapore.

Another challenge is that of transboundary haze, as smoke from intentionally-set fires in Kalimantan and Sumatra blanketed the island for several weeks. September also saw the first-ever known landspout, a type of tornado, touch down in Singapore. The winds damaged the roof of a factory near Tuas at the far west of the island.

To contact the reporter on this story: Derek Wallbank in Singapore at dwallbank@bloomberg.net

To contact the editors responsible for this story: Chua Baizhen at bchua14@bloomberg.net, Aaron Clark