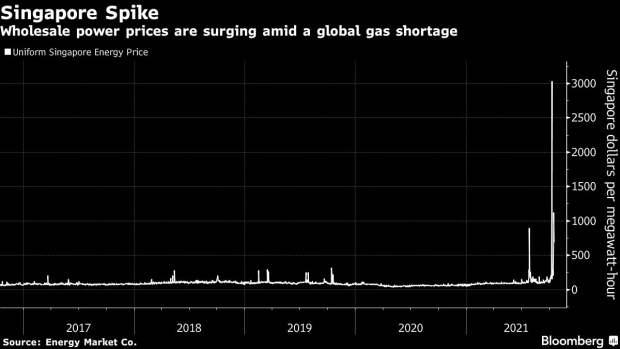 The Marina Bay Sands hotel and casino stands illuminated at night in Singapore, on Friday, July 12, 2019. An unexpected contraction in Singapore’s economy and a slump in China’s exports sent a warning shot to the world economy as simmering trade tensions wilt business confidence and activity. , Bloomberg

At least two power providers have announced they will cease retail operations after wholesale prices surged to a record last week. The government is offering help in hedging against volatility for those who want to continue operations, the Energy Market Authority said in a statement on Saturday. Retailers can also suspend operations while they strengthen their position, the agency said.

The strain is coming less than three years after Singapore launched its liberalized power market after previously having all customers buy electricity from state-owned grid operator SP Group. About half the city-state’s residents have switched providers. Customers of retailers who go under will be smoothly transitioned to another retailer or SP Group, the authority said.

“Electricity retailers who have under-hedged their positions may be exposed to the price volatility,” it said in the statement. “This is a consequence of their business decisions and can be expected in open and liberalized electricity markets, where participants may enter and exit the market, and market consolidation may occur.”

Singapore generates almost all its electricity from power plants running on natural gas, which is imported via pipelines or tankers. Most of that supply is linked to oil prices, but some is exposed to spot prices, which have surged amid a global shortage of the fuel.

For power retailers who don’t own generators and buy wholesale power to sell to customers at fixed rates, it’s a deadly combination. Retailers iSwitch Energy and Ohm Energy announced in the past week they’re leaving the market.

Singapore’s pipeline supplies from West Natuna are being curtailed, and those from South Sumatra are arriving at lower pressure than normal, the authority said. Demand has also been unusually high, hitting a record peak of 7,667 megawatts on Oct. 12.

That’s resulted in wholesale prices skyrocketing, with the Uniform Singapore Energy Price climbing as high as S$3,811.16 ($2,827) a megawatt-hour on Oct. 14, compared with an average of S$61.68 last year.