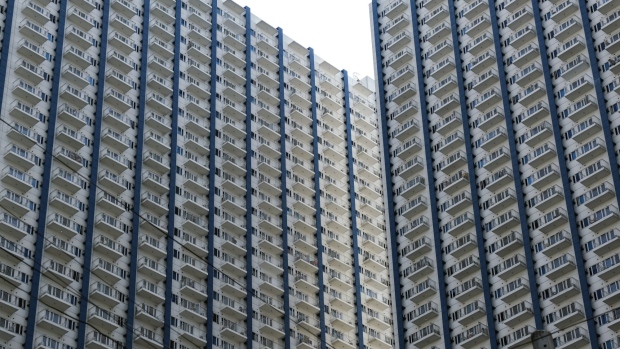 Residential building stand in Manila, the Philippines, on Monday, June 17, 2019. Manila, one of the largest and most congested urban areas in the world, has a solution to its problems: build artificial islands in the sea. Manila’s dilemma is one shared by many fast-growing cities in developing nations. Rapid growth in population⁠—boosted by migration from rural areas⁠—is overwhelming services, roads, transportation, power and drainage. Photographer: Veejay Villafranca/Bloomberg , Bloomberg

Purchases of new private units rose 82% to 1,589 in July, from 872 in June, Urban Redevelopment Authority data showed on Monday. It’s the highest increase since January, when 1,633 homes were sold, and comes after sales dropped for three consecutive months through June due to tightened virus curbs.

Singapore’s rebounding home sales show how the city-state’s property frenzy -- with $24 billion in sales recorded in the first half, double that of Manhattan -- is likely to continue. The government plans to ease virus restrictions further as part of its more recent approach to living with the virus instead of eliminating it.

The jump is due to buyers rushing to purchase homes out of fear of being priced out, especially as Singapore’s economy is poised for further recovery amid the government’s plans to reopen the country, said Christine Sun, senior vice president of research and analytics at OrangeTee & Tie.

Demand for private units in the suburbs is also growing as buyers upgrade from public apartments, she said.

The buying frenzy temporarily eased since May after authorities imposed tightened virus curbs, which are only starting to ease now amid a rising vaccination rate that’s one of the world’s highest.