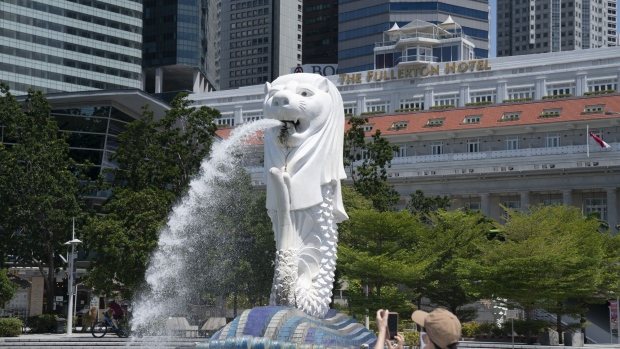 The Merlion Statue stands by Marina Bay in a near-empty Merlion Park in Singapore on Monday, July 6, 2020. Prime Minister Lee Hsien Loong vowed to hand over Singapore “intact” and in “good working order” to the next generation of leaders, predicting the coronavirus crisis will “weigh heavily” on the nation’s economy for at least a year. Photographer: Wei Leng Tay/Bloomberg , Bloomberg

Singapore has long defended the need for laws to police content on the internet, saying the island is especially vulnerable to fake news and misinformation campaigns given it’s a financial hub with a multi-ethnic population that enjoys widespread internet access. But critics are concerned that recently enacted laws, such as ones barring foreign interference in local politics and governing online falsehoods, could be used to stem dissent or mis-applied because they’re too loosely defined. Meta Platforms Inc.’s Facebook are among those that have expressed concern with Singapore’s fake news law.

The Southeast Asian nation joins countries such as Australia, Germany and the UK, which have enacted or proposed online content and safety laws. US internet giants such as Meta and Alphabet Inc. are under growing pressure worldwide to curb the spread of misinformation on their globe-spanning platforms, most recently around the coronavirus pandemic. Governments are concerned about their influence in an era where more and more people get their news online and through social media.

Under the proposed laws, examples of content that could be blocked include live-streamed videos of mass shootings and viral social media challenges that encourage young people to perform dangerous stunts, according to the Straits Times. They will also take into account sensitive issues like race and religion, the newspaper added.

“Online safety is a growing concern and Singapore is not alone in seeking stronger safeguards for our people,” Teo said in her post. “There is a growing global movement pushing to enhance online safety, recognising harms come along with the good when people engage on social media.”

(Updates with details from minister’s post from the first paragraph)