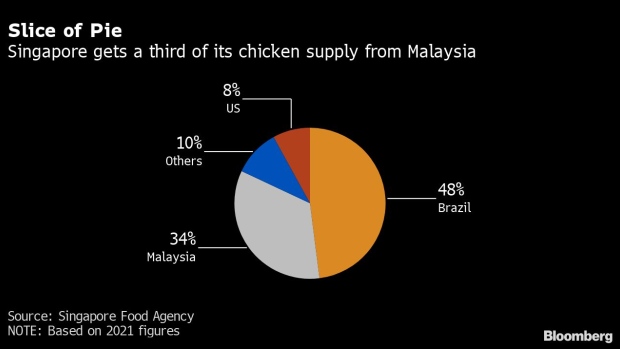 (Bloomberg) -- A plate of chicken rice in Singapore, one of the city-state’s most popular meals, is poised to get more expensive after Malaysia’s move to restrict exports.

The ubiquitous dish is found at almost every dining spot in Singapore, from hawker centers to high-end restaurants, and consists of poached chicken, rice and a garlic chili dip. Malaysia said it will halt chicken exports from June, a move that will hurt Singapore, which gets a third of its imports from its neighbor.

The export ban will likely further push up the price of chicken, Singapore’s most widely-consumed meat that’s already risen 5.7% in April, according to Lee Ju Ye, an economist at Maybank Investment Banking Group. Food inflation will remain elevated at between 4% and 6%, versus an average increase of 1.5% over the past five years, she said.

While food comprises 21% of Singapore’s consumer price basket, with meat accounting for just 0.1%, the impact of Malaysia’s move is not insignificant, said Selena Ling, head of Treasury Research & Strategy at Oversea-Chinese Banking Corp.

“If it’s persistent and more worryingly, reflective of more protectionistic measures by other countries over food security and inflation concerns, then this could be a lose-lose scenario for everyone,” Ling said.

Singapore Food Agency said almost all chickens from Malaysia are imported as live animals, which are then slaughtered and chilled. There may be temporary disruptions to chilled chicken supply, but frozen chicken remains available. It advised consumers to be open to switching and to buy only what they need.