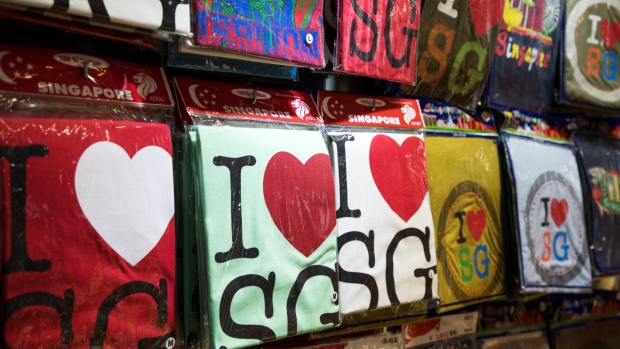 T-shirts are displayed for sale at a stall in the Chinatown area of Singapore, on Wednesday, June 13, 2018. Tourism as well as the consumer sector will likely see a lift thanks to the influx of international media at the recent DPRK-USA Summit, according to RHB Research Institute Singapore Pte. , Bloomberg

(Bloomberg) -- Singapore’s economy contracted sharply in the second quarter as exports continued to plunge amid a worsening global economy.

Gross domestic product in the trade-reliant city state declined an annualized 3.4% in the quarter compared with the first three months of the year. That compared with growth of 3.8% in the first quarter and 0.5% expansion forecast in a Bloomberg survey of economists.

To contact the editor responsible for this story: Nasreen Seria at nseria@bloomberg.net