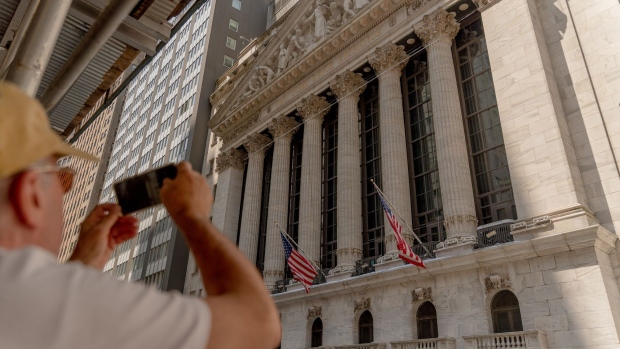 The New York Stock Exchange during the NYSE Summer Series program in New York, U.S., on Thursday, July 15, 2021. The series, which will run through Labor Day, brings the elements of trading floor excitement at the NYSE to Experience Square, the 7,000-square-foot cobblestone area in front of the historic exchange building on Broad Street in lower Manhattan. Photographer: Amir Hamja/Bloomberg , Bloomberg

(Bloomberg) -- FinAccel Pte, the parent company of Indonesian fintech startup Kredivo, agreed to go public in the U.S. through a merger with a blank-check firm that values the combined companies at $2.5 billion.

Singapore-based FinAccel is the latest startup in Southeast Asia to take advantage of a U.S.-led SPAC boom. It’s set to become the first dedicated fintech startup in the region to list in the U.S., joining Singapore’s Grab Holdings Inc. and PropertyGuru Pte, which are also planning to go public via blank-check companies.

Going public through the SPAC process lets the company “diversify the investor base and access larger amounts of capital faster,” FinAccel Chief Executive Officer Akshay Garg said in an interview. “The deal puts up to $430 million on the company’s balance sheet, which gives us the firepower to build a large, diversified, digital financial services business in Southeast Asia.”

Victory Street Capital and Kredivo began speaking about a potential deal after the fintech closed a $100 million credit facility from the firm in June, Garg said.

“We thought it made a ton of sense,” he added.

The proposed business combination is subject to approval by the SPAC’s stockholders and regulators. The merger is expected to close no later than the first quarter of 2022, according to the statement.