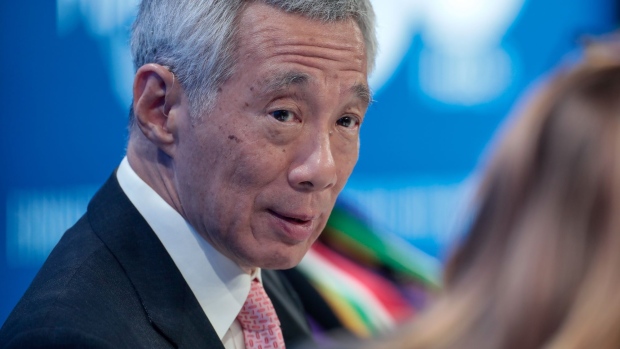 (Bloomberg) -- Singapore Prime Minister Lee Hsien Loong again warned the U.S. and China to deescalate their tensions, saying both powers presumed incorrectly they would win in any conflict.

“The reality is, neither side can put the other one down,” Lee said on Tuesday, speaking by video link to the Aspen Security Forum. “I think that is a possible misunderstanding on both sides.”

The U.S. is not in terminal decline, as some in Beijing believe, Lee said. Equally, “China is not going to disappear. This is not the Soviet Union.”

“I don’t know whether Americans realize what a formidable adversary they would be taking on if they decide that China is an enemy.”

Over the years, Lee has been vocal in calling for the world’s biggest economies to avoid a destructive clash that could force smaller countries like Singapore -- with its open, trade-reliant economy -- to choose sides. Following the election of President Joe Biden last year, he said the U.S. should look to develop an “overall constructive relationship” with China under a framework that would allow the countries to develop areas of common interest and “constrain the areas of disagreement.”

Lee told the forum that views had hardened in both the U.S. and China, and that the Biden administration was also constrained as a result, even as it brought a more “reliable and predictable” approach to foreign policy than the presidency of Donald Trump.

“I think it will be hard to reverse the present trend toward more troubled relations but many countries still hope that the deterioration in the relationship can be checked,” Lee said.

“Many U.S. friends and allies wish to preserve their extensive ties with both powers. No good outcome can arise from a conflict. It’s vital for the U.S. and China to strive to engage each other to head off a clash which would be disastrous for both sides and the world.”

The remarks come as the Biden administration seeks to bolster its presence in Asia as a counterpoint to a more assertive China. Last month, the White House’s top official for Asia said the U.S.’s position in Asia had “slipped,” losing ground to China as the two nations disagree on everything from the South China Sea to technology and human rights.

The U.S. has donated millions of Covid vaccine shots to countries across Southeast Asia amid a surge in virus cases and last week sent Defense Secretary Lloyd Austin to Singapore, Vietnam and the Philippines to reassure leaders of its commitment to engagement in the region. He also vowed to challenge what he called China’s aggression. The U.S. plans to follow up with a visit from Vice President Kamala Harris to the region later this month.

Lee told the forum that U.S. allies were now feeling a “palpable sense of relief” and looking for long-term foreign policy consistency.

”They hope for a reliable and predictable U.S. which will provide a stable anchor for the international order.”