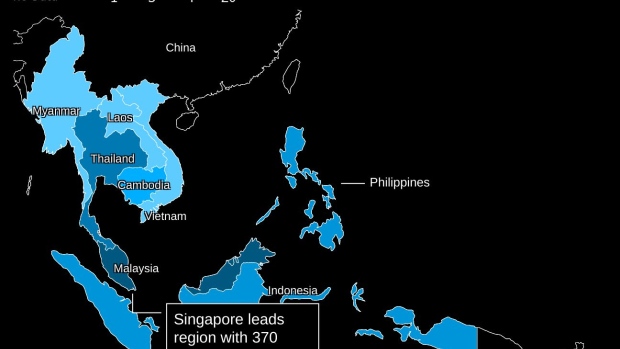 A jogger runs in a near-empty Merlion Park during the "circuit breaker" lockdown in Singapore, on Wednesday, May 20, 2020. Singapore will allow more businesses to reopen on June 2 -- increasing the active proportion of the economy to three-quarters -- after a nationwide lockdown cut transmission of the coronavirus among citizens and permanent residents. Photographer: Lauryn Ishak/Bloomberg , Bloomberg

(Bloomberg) -- Singapore’s approach to the virus is set to become a defining issue in upcoming elections, with lockdown curbs set to drag on past most of Asia’s after its original, less restrictive approach was scuppered by a second wave of infections.

The city state is trying to prevent another resurgence in virus cases after an outbreak centered on its army of low-waged migrant workers sent cases above 35,000. The result is a cautious, three-stage strategy of opening up that puts it behind other countries in the region that started restrictive lockdowns weeks before Singapore.

How the delay is viewed by voters has political implications for the government -- which has maintained power through a combination of successful economic management, the lack of a united opposition, and election rules favoring the incumbents -- with some businesses saying the protracted timeline means they could go under despite fiscal support.

The People’s Action Party, which has held power since Singapore’s independence in 1965, is still widely expected to win an election that must be held by early next year. But any significant narrowing of its margin of victory could shake confidence in a new generation of leaders being groomed to take over from Prime Minister Lee Hsien Loong’s team. The son of Singapore’s founding premier, Lee Kuan Yew, the current leader has signaled he intends to step aside by the time he turns 70 in 2022.

After the PAP won the 2011 election with one of its smallest margin of popular votes, the government embraced more populist measures by boosting spending on lower-income families and the elderly. It also tightened rules on work passes for foreigners, who make up more than a third of the island’s 5.7 million people.

“Covid has revealed major blind spots of the next generation of leaders, which in turn has raised doubts about the strong mandate the party seeks in the upcoming elections,” said Terence Lee, an associate professor of political science at National University of Singapore. He said a disappointing performance could prompt the government to take populist economic steps like spending more to support small businesses and tightening immigration.

Singapore’s experience shows how even the best-regarded governments worldwide have been stymied by the pandemic, in which waves of infection and untraceable chains of transmission have required repeated changes of strategy amid economic devastation.

Hundreds of businesses and residents are pushing back against continued restrictions that forbid dining-in or social gatherings for at least another three weeks. Close to 250 restaurant owners who run over 700 outlets have banded together under the campaign #savefnbsg and are lobbying officials for more support. A petition to allow “limited social interactions” from June 2 has garnered over 15,000 signatures.

Businesses that rely on walk-in customers like eateries and gyms have been especially hard-hit by the extended lockdown. While the government is providing financial support that should in theory cover up to four months of rental relief for small businesses, landlords have not passed this on evenly, prompting legislation to force them to.

For cocktail bar Jekyll & Hyde, the help won’t come soon enough. It prepared to shut down in April as sales dropped by more than half. After media reports of the celebrated bar’s plight, owner Ee Chien Chua found a new landlord willing to take a cut of profits rather than charge a fixed rent.

“I think the two months of lockdown was necessary, but I don’t fully agree with the phased re-opening approach and how slow it is,” said Chua. “I’m sure in June you’re going to see a huge spike in businesses shutting down.”

Minister for National Development Lawrence Wong said last week that its re-opening plan is being refined, while emphasizing that it has provided ample financial support for businesses and residents in the form of wide-ranging rental and salary subsidies.

“We are doing all that we can to support businesses that are unable to reopen immediately and also to support their workers,” said Wong, who co-chairs the government taskforce on fighting the virus. The timeline “is premised on what we think is safe to do from a public health point of view.”

As Singapore heads for its worst recession ever, the city state has unveiled four stimulus packages costing a total of S$92.9 billion ($66 billion), or 19.2% of GDP. The measures are being funded in part by some S$52 billion this financial year from the nation’s flush reserves, allowing it to be one of the few countries in the world that won’t have to issue debt to survive the crisis.

It’s only the second time that Singapore has drawn down on its national savings, which it’s required to pay back by law after the crisis has passed. In 2009, it received approval to draw a relatively paltry S$4.9 billion to protect jobs during the financial crisis.

Funding has been extended to Singaporeans and businesses across-the-board instead of just being targeted at vulnerable sectors like aviation, tourism and food and beverage, raising questions over whether taxes will need to be increased later to replenish the coffers, said Chua Hak Bin, senior economist at Maybank Kim Eng Research Pte.

Still, the largesse could help sweeten moods in a move reminiscent of the cash handouts that the government has included in its budget during past election years.

“It’s good that the older generation of the government had foresight to build such deep reserves, because the new generation of leaders are solving the crisis by throwing money at it,” said citizen Ann Lei, a financial services professional in her thirties.

The government is “rich enough” to continue doling out financial support and the upcoming polls could show a gain in support given how voters see the ruling party as “big papa,” said Bilveer Singh, associate professor at the National University of Singapore’s department of political science.

The opposition presence in Singapore is moribund: the ruling party controls the timing of the poll, dominates parliament which passes electoral rules and oversees resources like community facilities and organizers. Some opposing politicians have been bankrupted by defamation lawsuits.

“The opposition is broken, they are divided, and they are nowhere to be seen,” said Singh.

For that reason, local elections are largely seen as a referendum on the government’s performance. In the last election in 2015, Singaporeans returned the PAP to power with 69.9% of the vote -- the highest level of support since 2001 -- in polls held just a few months after a national outpouring of grief over the death of Lee Kuan Yew, a revered figure whose out-sized presence still looms over the small nation.

“There is a quiet determination to redeem the ‘gold standard of governance’ accolade,” said Eugene Tan, a political commentator and law professor at the Singapore Management University. “Bragging rights have somewhat been lost with the massive number of infections in the foreign worker dormitories, and they want to be able to show how good the recovery from the lapses have been, even if they don’t publicly admit to having dropped the ball.”

The Singapore government’s earlier approach of minimal disruption -- which included discouraging masks unless unwell and keeping schools open -- and its late shift to targeted mass testing compared to other countries like South Korea meant infections spread undetected for weeks among foreign workers living in dormitories.

The city is still handling its outbreak better than many developed countries: its healthcare system is not overwhelmed and its death toll is one of the lowest in the world. Less than 1% of cases are seriously ill while only seven people are in intensive care.

But for citizens used to smooth-running and efficient governance, officials’ shifting messaging, the punishing extended lockdown and the global attention attracted by the city’s woes have been discomforting.

“It’s not really about how foreign workers are being treated because Singaporeans had in the past accepted their living conditions, but more about keeping cases down as a whole,” said former PAP Member of Parliament Inderjit Singh. “The opposition will use those factors to show the government’s incompetence.”

A survey by Blackbox Research conducted in early April, when the lockdown was beginning, found that 90% of Singaporeans believed the measures would work, though 50% of them thought they should have been implemented earlier -- signaling a broad view that the government has been behind the curve in managing the pandemic, a potential electoral vulnerability given the party’s reputation for pro-active leadership.

But others say that Singapore’s leaders have done the best they can in a crisis that’s confounded governments everywhere.

“The government has been quite responsive to the evolving situation and didn’t take it too badly when there was lots of criticism,” said citizen Sue Zhu, 53, a counseler in private practice. “I’m particularly impressed with how fast things were rolled out, in terms of financial packages and giving everyone masks.”

Regardless of the electoral outcome, Singaporeans are girding themselves for a long period of economic pain.

“Dining-in is not going to resume any time soon, I am prepared for this to drag out for the rest of the year,” said Kenneth Yong, 36, who runs a private dining business out of his apartment. “My income is at a level I can get by. It’s not a level that I feel secure about the future.”