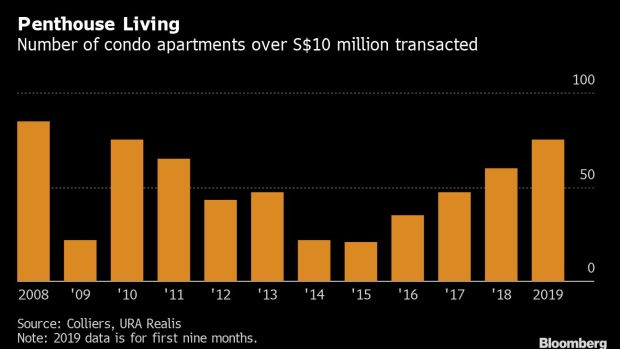 (Bloomberg) -- The luxury end of Singapore’s residential market is hot, and according to Colliers International Group Inc., it’s because of increased interest from mainland Chinese nationals.

While some market watchers have speculated the turmoil in Hong Kong may lead people there to buy property in the city-state, it seems that isn’t necessarily the case.

“The increase in luxury home sales could be due to more China buyers seeking an alternative from Hong Kong, while others may have shifted funds from China after the yuan was devalued,” said Tricia Song, the head of research for Singapore at Colliers. She added the Singapore dollar is also perceived to be more stable.

In the first nine months of the year, 315 apartments in Singapore’s prime core central region were bought by foreigners, almost recovering to the pace before the government introduced cooling measures in July 2018. Of those, 97 units, or about one-third, were purchased by mainland Chinese nationals, which make up the largest foreigner buyer group in Singapore.

Meanwhile, only eight units were bought by Hong Kongers.

“Based on the available data, we have not seen any strong evidence to suggest a sharp inflow of Hong Kong money into Singapore residential properties. However, we note that there is more Chinese interest, particularly in luxury homes,” Song said.

While the government doesn’t break down nationality data by property value, the figures show that over the same period, 75 apartments were sold for S$10 million ($7.3 million) or more, equal to all of 2010.

--With assistance from Philip J. Heijmans.

To contact the reporter on this story: Katrina Nicholas in Singapore at knicholas2@bloomberg.net

To contact the editors responsible for this story: Katrina Nicholas at knicholas2@bloomberg.net, Marcus Wright