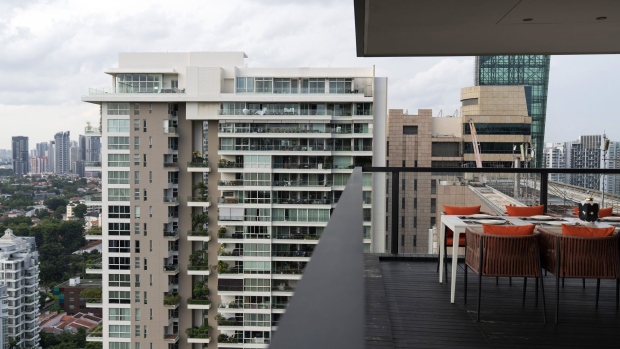 Luxury condominium across from the outdoor dining area of an apartment for sale at the Reignwood Hamilton Scotts luxury apartment building on Scotts Road in Singapore, on Thursday, Aug. 5, 2021. The apartment listed on the market with Singapore Realtors Inc. is in a neighborhood that's walking distance from the famous Orchard Road shopping district in Singapore, where home prices jumped by a record 4.1% in the first half as tycoons across Asia seek a safe harbor. Photographer: Wei Leng Tay/Bloomberg , Bloomberg

(Bloomberg) -- Singapore home prices grew at a faster pace in the second quarter as concerns about the rising cost of living and higher interest rates failed to curb demand for now.

Singapore is seeing buoyant demand for homes following a rebound in sales that reached a six-month high in May, even as the world’s bubbliest housing markets show signs of cooling. Central banks around the globe are rapidly increasing interest rates, causing borrowing costs to soar for homebuyers.

The city-state’s key inflation gauge is rising to its fastest in almost 14 years, stoking concerns about the rising cost of living and a looming recession. That may yet temper growth in Singapore, where buyers have been capitalizing on low interest rates and expectations that prices will climb further as the economy recovers.

Earlier this week the city-state’s largest lender, DBS Group Holdings Ltd., raised the rates on all its home loan packages. Some foreign banks in Singapore have also suspended fixed-rate home loan packages that could be prompted in part by rising interest rates making such deals less attractive for lenders.