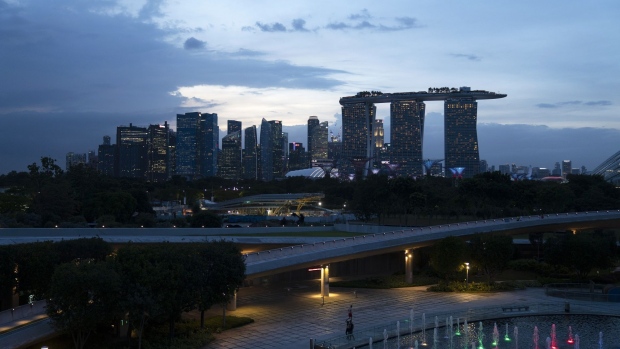 The Marina Bay Sands hotel and casino, right, and other buildings stand beyond the Marina Barrage in Singapore, on Thursday, Feb. 6, 2020. While governments around the world are struggling to meet the goals of the Paris agreement. Singapore is devising a S$100 billion ($72 billion) plan to safeguard the city against temperatures and floodwaters several times those levels. The real challenge facing the island, though, is water. Singapore has a network of reservoirs to catch most of its rainwater and is able to recycle about 40% of its water needs. Photographer: Wei Leng Tay/Bloomberg , Bloomberg

(Bloomberg) -- A jump in Singapore bank deposits probably reflects investors’ risk aversion and inflows from markets including Hong Kong given the country’s status as a private banking hub, according to Bloomberg Intelligence.

Foreign-currency deposits at local banks almost quadrupled from a year earlier to a record S$27 billion in April, Monetary Authority of Singapore figures showed Monday. Deposits from non-residents surged 44% to S$62 billion, also the highest level since 1991 when records began, the data show.

“Rising tensions in Hong Kong, starting with protests last year and the announcement of a national security law last month could potentially cause flows to Singapore if Hong Kong’s status as a financial center is threatened,” Diksha Gera, a banking analyst at Bloomberg Intelligence, wrote in the report Tuesday.

The increase in foreign-currency deposits may have been caused by factors such as deleveraging of private banking portfolios and fund managers’ positions as risk-averse clients sold financial assets, Gera wrote.

Singapore and Hong Kong have long attracted the wealthy from all over the world to park their assets with banks including UBS Group AG and Credit Suisse Group AG. Since last year, Hong Kong has been hit by waves of protests against the government which have intensified in recent weeks because of the opposition to China’s new laws.

Hong Kong’s local-currency deposits fell by HK$79.2 billion ($10 billion), or 1.1%, to HK$6.9 trillion in April from a year ago, the Hong Kong Monetary Authority said in its monthly report.