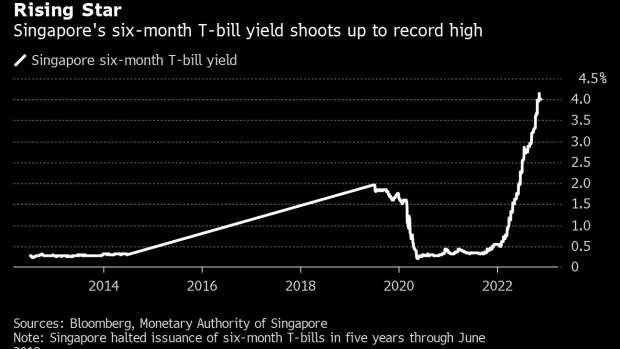 The city state sold S$4.8 billion ($3.5 billion) of six-month T-bills after drawing cumulative bids worth S$11.9 billion. The securities were sold at an average yield of 3.9% on Thursday, edging down from the 4% offered two weeks ago when there was also a record amount of bids.

The demand reflects how soaring inflation is driving investors to look for ways to protect their capital, while other assets continue to come under pressure from higher rates. With growing expectations that central banks may be slowing hikes, funds are also looking to lock in higher yields.

“The six month T-bill cut-off yields have been falling over the last two auctions, reflecting a retracement in Treasury yields and increased demand from retail investors in search of higher safe return,” said Winson Phoon, head of fixed income research at Maybank Securities in Singapore.

T-bills are available both to retail and institutional investors, unlike short-term debt issued by the Monetary Authority of Singapore. Yields awarded on six-month bills jumped to 4.19% in October, from just over 2% in June.

Core inflation in the island state rose to 5.1% from a year ago last month, with the MAS having tightened five times through its exchange rate since last October.

Demand for government debt from retail investors will be further tested when application for the nation’s so-called saving bonds closes on Friday. The Monetary Authority of Singapore is selling S$1 billion of 10-year notes, an instrument to bolster retirement savings, with a yield of at least 3.2%.

--With assistance from Chanyaporn Chanjaroen and Marcus Wong.