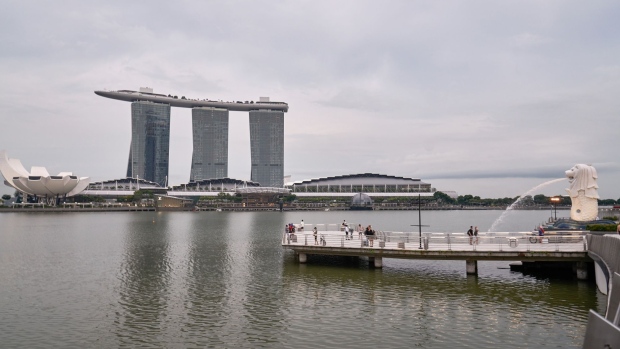 The Marina Bay Sands beyond Merlion Park in the central business district of Singapore, on Wednesday, May 19, 2021. In the financial mecca of Singapore, technology companies have been steadily growing their footprint in recent years, chipping away at the dominance of banks in the island-state's central business district. Photographer: Lauryn Ishak/Bloomberg , Bloomberg

“It was an important debate,” Lee said in a Facebook post on Wednesday. “At stake were not just our policies on foreigners, but the values of our society, and our confidence and resolve to face an uncertain world, and chart our way forward together.”

He praised lawmakers for taking “a firm and unequivocal stance against racism and xenophobia.”

Finance Minister Lawrence Wong had asked parliament to support the government’s management of foreigners coming to Singapore for work, as well as to deplore the spreading of misinformation around Singapore’s free trade agreements, particularly with India.

Leong Mun Wai of the opposition Progress Singapore Party continued to press for curbs such as imposing levies on expats, arguing that foreigners have taken jobs from locals.

In the end, the parliament -- dominated by members of Lee’s ruling People’s Action Party -- voted to pass the motion, according to the Straits Times.

“If we turn inwards and become hostile to them, it would ruin us as a global hub and cost us investments and jobs,” Lee said, referring to the foreign workforce.