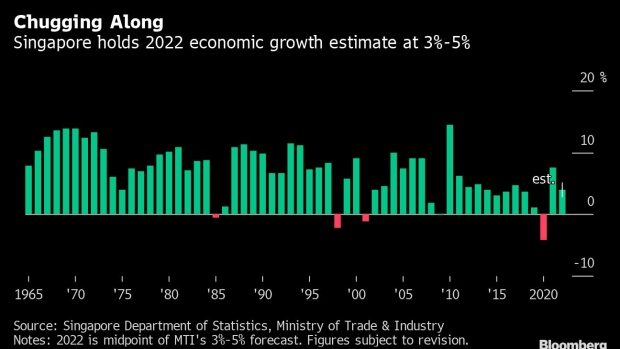 Paddlers row past the central business district, at Marina Bay in Singapore, on Sunday, Oct. 3, 2021. Singapore is looking to launch new vaccinated travel lanes by the end of the year and is in negotiations with several countries including those in Europe and also the U.S., Trade Minister Gan Kim Yong said, signaling continued caution even as other advanced economies open up. Photographer: Ore Huiying/Bloomberg , Bloomberg

(Bloomberg) -- Singapore sees the economy expanding at the slower end of its expected range this year as the war in Ukraine and sustained supply chain disruptions weigh on the outlook for the trade-reliant city-state.

While reiterating its earlier 3% to 5% growth expectations for 2022, the Ministry of Trade & Industry said Wednesday that “growth is now more likely to come in at the lower half of the forecast range.”

Supply-chain tensions have risen amid Russia’s invasion of Ukraine and Covid-related lockdowns in China, exacerbating inflation and triggering a global march toward higher interest rates.

“The external demand outlook for the Singapore economy has weakened compared to three months ago,” the ministry said in a statement. “At the same time, downside risks in the global economy remain significant.”

Singapore’s core inflation gauge accelerated in April to its fastest in more than a decade, complicating the outlook for the Monetary Authority of Singapore, which tightened policy last month.

The ministry on Wednesday also published final economic estimates for the first quarter, which showed year-on-year gross domestic product growth of 3.7%, compared with a prior estimate of a 3.4% and in line with a Bloomberg survey. The economy expanded 0.7% in the first quarter from the prior three months.

Further first-quarter GDP details, year-on-year, from the MTI include: