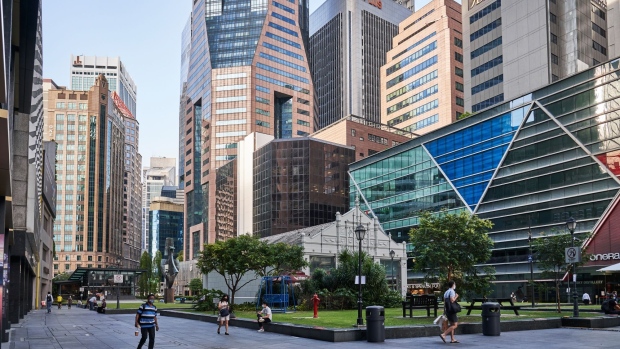 Pedestrians pass through a near empty Raffles Place in the central business district (CBD) of Singapore, on Tuesday, Sept. 28, 2021. Singapore’s Finance Minister Lawrence Wong said earlier this week that the country is committed to reopening, and that recently reimposed curbs are to ensure the health system can handle an increased number of daily cases. Photographer: Lauryn Ishak/Bloomberg , Bloomberg

(Bloomberg) -- The Monetary Association of Singapore said it would be “intensifying its scrutiny of major financial institutions’ fraud surveillance mechanisms,” as the Asian financial hub grapples with a spate of scams spoofing banks, courts and government health officials.

The move comes after more than 450 customers of Singapore’s second-largest bank, Oversea-Chinese Banking Corp., lost at least S$8.5 million ($6.3 million) to scams impersonating the bank. OCBC said everyone who lost money in the scam will get full goodwill payouts, while apologizing for lapses in how it responded to customers hit by the scams.

“The growing threat of online phishing scams calls for immediate steps to strengthen controls, while longer-term preventive measures are being evaluated for implementation in the coming months,” MAS and the Association of Banks in Singapore said in a joint statement late Wednesday.

Singapore has seen a rise in scams, from automated callers impersonating the Ministry of Health staff to text messages warning about banking troubles and asking recipients to click a link. Signs at subway stations warn people against sending money to scammers posing as would-be lovers online. The Supreme Court on Wednesday cautioned against a new scam that involved fake emails purporting to be court documents.

Though government leaders have repeatedly warned scams are on the rise, and stepped up law enforcement, the OCBC fraud has struck a chord in the city-state with local media reports of victims having their life savings wiped away suddenly. It’s sparked commentaries raising questions about safeguards amid Singapore’s push to position itself as a tech and digital banking hub.

Under new rules announced Wednesday, banks in Singapore will implement more stringent measures within the next two weeks, including:

In response to the latest measures, DBS Group Holdings Ltd. said late Wednesday it will stop sending non-essential SMS messages from Friday until further notice. Jeremy Soo, its Singapore head of consumer banking group, said the bank has a dedicated anti-scam team to carry out intervention work, monitor and review fraud alerts, including “stationing a full-time employee at the Singapore Police Force’s anti-scam centre to ensure timely freezing of any accounts.”