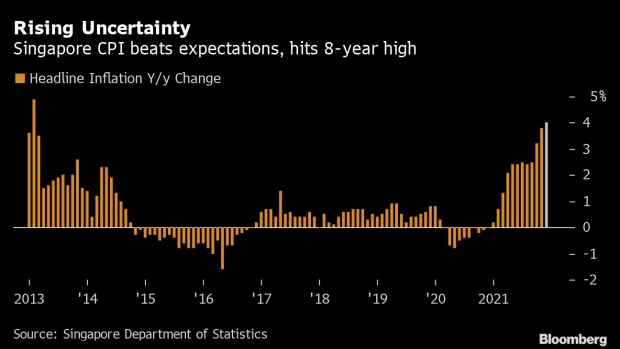 (Bloomberg) -- The Monetary Authority of Singapore announced in a surprise move Tuesday that it was further tightening monetary policy, citing upside risks to its inflation forecasts.

The central bank, which uses foreign exchange as its main policy tool, said it will “raise slightly the rate of appreciation” of its main currency band, while keeping the width and center of the band unchanged. The Singapore dollar rose 0.3% to S$1.3430 against the dollar, its strongest since October.

The unexpected announcement, ahead of its scheduled April meeting, follows the headline consumer price index hitting an 8-year high on Monday, which prompted the government to review inflation forecasts. The move also comes ahead of the Federal Reserve’s first meeting of the year, in which it’s likely to pave the way for interest-rate increases starting in March.

“This allows MAS more breathing space,” said Vishnu Varathan, head of economics and strategy at Mizuho Bank. “They don’t want to trip over the same transitory aspects and signaling that the Fed did. There is value for MAS in doing this sooner rather than later.”

Singapore’s economy is set to remain on track to grow 3% to 5% this year, the MAS said in its statement.

“Core Inflation is forecast to be higher in the near term in view of rapidly accumulating external and domestic cost pressures,” it said. “While core inflation is expected to moderate in the second half of the year from the elevated levels in the first half as supply constraints ease, the risks remain skewed to the upside.”