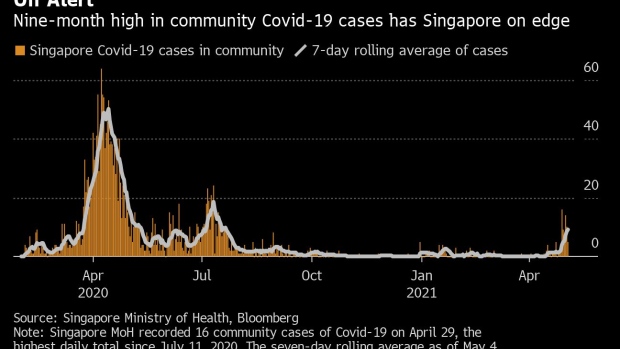 Customers sit outside bars in the Boat Quay area of Singapore, on Friday, Jan. 15, 2021. Singapore is speeding a new law through parliament to allow the use of contact tracing data for criminal investigations after recent disclosures spurred concern that the government was using the information for more than just fighting Covid-19. , Bloomberg

(Bloomberg) -- Singapore is limiting social gatherings to a maximum of five people and tightening border curbs as it reacts aggressively to a flareup linked to the new variant first identified in India, a setback to one of the world’s most successful virus containment regimes.

From May 8 to May 30, group gatherings must be cut from a maximum of eight to five, while daily visitors per household will be similarly capped, the Ministry of Health said in a statement on Tuesday. At workplaces, no more than 50% of staff who are able to work from home can return to offices, down from the previous 75% limit.

Meanwhile, authorities plan to reduce the number of people at events like live performances and business meetings, and suspend all mass participation sports events. It is also closing indoor gyms and fitness studios, though outdoor exercise classes may continue.

Traveler quarantine from May 8 will be boosted to 21 days from the current 14, except for a small group of lower-risk places including Australia, Brunei Darussalam, China, New Zealand, Taiwan, Hong Kong and Macau, the statement said.

The urgent reaction to a relatively small number of cases -- the latest outbreak numbers some 60 local infections in the past week -- is due to concern that some of the clusters are being driven by highly transmissible variants, including one suspected of igniting India’s devastating second wave. Virus variants are outracing vaccination progress in many places across the world, threatening to extend the pandemic.

“They are more infectious, they are causing larger clusters than before,” said Lawrence Wong, co-chair of the government task force for fighting Covid-19. “We have tried our best to ringfence the cases through contact-tracing, but we must assume that there are still hidden cases out there in the community.”

Of the five new cases Singapore reported on Tuesday, all are tied to a growing cluster at a large public hospital that now stands at 40 and are linked to the India variant, said officials. Over the weekend, the nation recorded its first fatality due to complications from Covid-19 in nearly two months.

Authorities are also bringing forward the implementation deadline of its contact-tracing app or device, TraceTogether, to May 17. The app will be mandatory for entry to more venues like hotels and restaurants.

Singapore is one of the more successful spots in the world in curbing the virus, similar to others in Asia that have largely halted the spread but where virtual elimination is being challenged by sporadic flareups. In a bid to stay at zero local cases, these places -- including New Zealand, Australia, Hong Kong and China -- react aggressively to small numbers of infections.

The new flareup potentially threatens Singapore’s efforts to open up a long-awaited travel bubble with Hong Kong and host major upcoming summits including the World Economic Forum in August and Shangri-La Dialogue next month.

Already, the island nation on Monday asked hospitals to defer non-urgent surgeries and admissions until further notice in a bid to increase potential capacity for handling Covid-19 patients. Government agencies have stepped up enforcement checks by penalizing businesses and individuals for breaching safe management measures, and an open house for the public to visit the president’s official residence next week has been canceled.