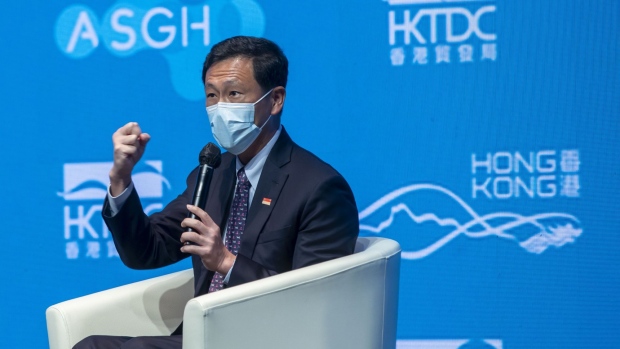 (Bloomberg) -- One of the highest vaccination rates in the world and growing natural immunity could protect Singapore from a Covid-19 resurgence like those currently engulfing Europe and the U.S., even if another wave hits as expected, Health Minister Ong Ye Kung said.

Singapore’s immunized population is half as likely to die of Covid than influenza, while those who aren’t vaccinated are five times more likely to succumb to the infection, Ong said in an interview with Bloomberg News on Wednesday at the Asia Summit on Global Health in Hong Kong. That shows that the virus can be endemic, provided enough people are immunized, he said.

About 85% of Singaporeans are fully vaccinated, and the city state is the third-most inoculated place in the world, according to Bloomberg’s Vaccine Tracker. Some 94% of those eligible for Covid shots have gotten them, according to the health ministry, and nearly one-in-four people have already received a booster shot, Ong said.

“Can we keep ICU cases and deaths as low as possible, to the extent that it’s no different from an influenza wave?” he asked. “I think it’s possible,” he said. “Even when it’s a wave you can withstand it. There are casualties but you are able to work through it with society still functioning very normally.”

The number of people infected in Europe and many parts of the U.S. is rising again, with some places reporting record increases and imposing new restrictions. While shots protect against severe disease, deaths are also climbing, particularly among the unvaccinated, and some hospitals are starting to ration care for the first time since the pandemic began nearly two years ago. The virus’s cyclical nature has policy makers in other parts of the world trying to anticipate when they may get hit again, and if so how hard, with vaccines altering the outlook.

Unrest Is Spreading in Europe as Coronavirus Lockdowns Return

Singapore has slowly been pivoting away from a Covid Zero strategy of walling out the virus, gradually allowing more cases and opening its border to different countries. The relaxation of mitigation measures means the virus will continue to spread, but vaccinations, boosters and other steps like mask-wearing and social distancing will keep the number and severity of infections down, Ong said.

The next two weeks will be critical for Singapore, he said.

Officials won’t decide whether to ease pandemic restrictions further, or to hit pause on the reopening, until it’s clear where the outbreak is headed, he said. The country, which has been seeing around 1,500 new cases a day -- up from double digits at the start of the year, but down from the peak above 4,500 last month -- recently allowed five people from different households to dine together in a restaurant, up from two.

“Cases ought to go up,” he said. “On the other hand, we are also boostering at a fairly decent pace. We are also seeing more people recovering safely, and there will be natural immunity. With all three measures in place, it applied brakes on the natural rise of infections. We will have to monitor closely for the next two weeks, and then we will know.”

Singapore recorded 2,030 cases in the community on Wednesday, more than 1,000 fewer than on the same day last week and the lowest Wednesday total since September. The city-state’s week-over-week infection ratio dropped to 0.75, the lowest number logged since officials began releasing it.

One of the next relaxation moves will be to ease work from home requirements, Ong said, without giving a timeline for when or how that may occur.

Singapore reopened dining-in in August, and just weeks later began battling a new wave of cases, prompting its leaders to pull back and reimpose some virus measures. Prime Minister Lee Hsien Loong said last week the country is taking a “step-by-step” approach to reopening. It has also taken a tough line on inoculation, saying those who choose not to take the shots will have to pay for any hospital treatment if they get Covid.

While easing restrictions has triggered rising case rates, severe disease and deaths have remained a fraction of what occurred in other countries. Ong said he expects the virus to return and hit Singapore again even after this wave is contained, since that’s its normal cycle.

The city, he hoped, will be able to withstand the onslaught.

“The direction is clear, we want to progressively open up more and move toward a stage where it becomes an endemic disease,” he said.