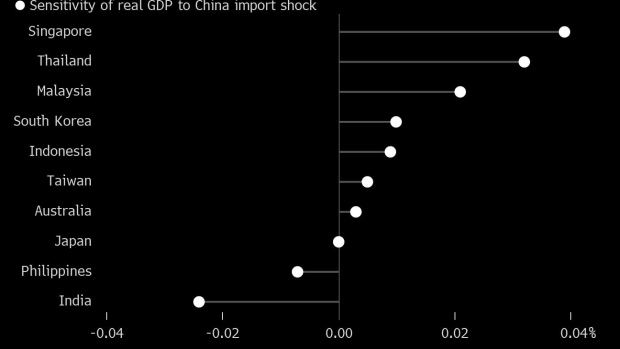 (Bloomberg) -- A slowdown in China’s economic activity from prolonged coronavirus lockdowns this year is set to create the largest knock-on effect on Singapore, according to Natixis SA.

Singapore could see the biggest hit to its gross domestic product as large-scale lockdowns disrupt manufacturing and dampen consumer demand in China, the world’s second-largest importer, Natixis said in a report on Wednesday. India, on the contrary, stands to benefit the most, it said.

While Singapore does not have a direct large exposure to China, as a trade center and especially as a key commodity hub in Asia, the city-state is indirectly vulnerable to Chinese demand given Beijing’s role in commodity imports, Natixis economists including Alicia Garcia Herrero and Trinh Nguyen said. Thailand’s economy too is at risk because of its dependence on Chinese tourists, they wrote.

India, meanwhile, could enjoy a growth boost as the sudden weakening of Chinese demand is bound to depress global commodity prices and improves the nation’s terms of trade.

In terms of foreign exchange, the Australian dollar is likely to depreciate the most in the Asia Pacific region, the economists wrote. Unlike its neighbors that export primary or intermediate goods to the mainland as part of the global supply chain, Australia is vulnerable to changes in Chinese demand because it ships out raw materials like iron ore for local construction.

Large-scale lockdowns will likely shave off 1.5 percentage points from GDP growth in China this year, Natixis said, cutting its annual estimate to 4.2% from 5.2%. “Should China lockdowns persist longer, shocks to GDP will be much worse,” the authors wrote.