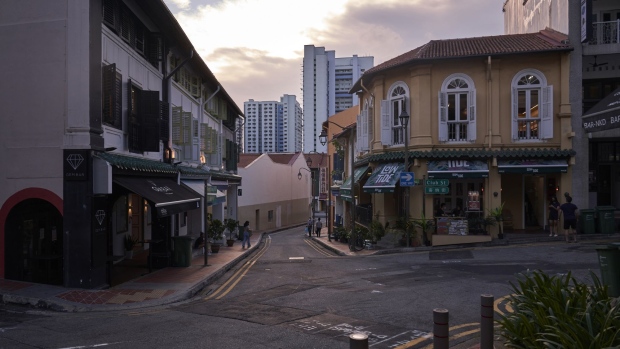 Near-empty streets in the Chinatown area of Singapore, on Tuesday, Aug. 3, 2021. Daily virus case counts in Singapore have stayed well above 100 since July 19, after an outbreak at a fishery port led government officials to reimpose tighter Covid restrictions. Photographer: Lauryn Ishak/Bloomberg , Bloomberg

(Bloomberg) -- Singapore will spend S$650 million ($480 million) to provide additional support measures and cushion the impact of its renewed virus-related restrictions on workers and businesses.

The package will be funded from higher-than-expected revenues and there won’t be a further draw from its past reserves, the government said Friday. Authorities will boost jobs support and waive rentals for some business owners, and give financial assistance to taxi and private hire car drivers as part of the plan, it said.

Singapore added more virus-related curbs for about a month as it seeks to rein in a record surge in cases. Restrictions were reimposed on dining-out and other social gatherings. Still, the country is not going back to a “heightened alert” or a lockdown, its virus taskforce said on Friday.

The latest package includes an enhanced jobs support plan for sectors which are significantly affected, including restaurants and food stalls, retail, and cinemas. The government will provide a two-week rental waiver for tenants on state-owned commercial properties, and an equivalent cash payout to those on private ones.

The city state had pledged about S$100 billion to help cushion the blow from the virus restrictions, and provided similar packages when restrictions were imposed. The economy has made a rapid recovery this year, shaking off an up-tick in virus cases and allowing the government to revise its forecast for annual economic growth to as much as 7%.