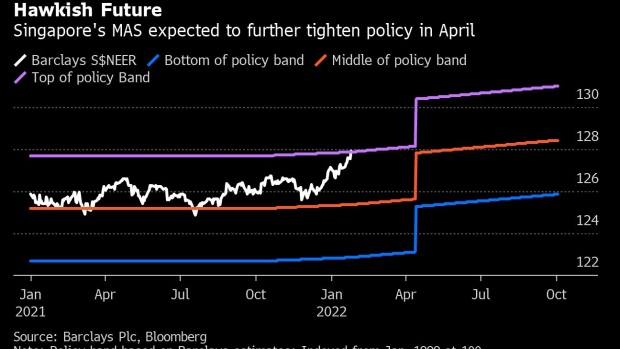 The Monetary Authority of Singapore, which uses foreign exchange as its tool to stabilize prices, will take further steps to let the local currency appreciate in its April policy announcement, according to 15 out of 16 economists in a survey and research notes compiled by Bloomberg.

The central bank’s first unscheduled adjustment in seven years, which pushed the Singapore dollar to a three-month high, puts it among global central banks seeking to tighten policy in the face of rising consumer prices. It also comes as the Federal Reserve prepares to begin raising rates in March.

“We expect the MAS to tighten again,” Chua Hak Bin and Lee Ju Ye at Maybank Kim Eng Research Pte. wrote in a note Tuesday. Steps taken so far “may not be sufficient to reduce imported inflation,” as the Singapore dollar is already trading near the top of its policy currency band, they said.

Singapore’s surprise move, along with higher-than-expected inflation figures from Australia on Tuesday, combined with market skittishness ahead of the Fed’s Wednesday meeting to push Asian stocks and U.S. equity futures lower.

Further moves expected in April put Singapore among the forefront of central banks beginning to rein in looser policies that helped economies weather the pandemic. As Covid’s threat to growth fades, the focus has shifted toward controlling inflation driven by supply-chain disruptions, higher commodities prices and fiscal stimulus.

Unlike most central banks, Singapore uses foreign exchange as its main policy tool, guiding the local dollar against a basket of trade-partner currencies. In its statement Tuesday, the MAS said recovering global demand and supply-side issues had pushed prices higher since its last meeting in October.

For its core inflation measure -- which last month hit the highest level since July 2014 -- the MAS cited rising energy and elevated imported-food prices, as well as rising airfare and wages growing above historical averages amid a tight domestic labor market.

Its last two actions -- a scheduled announcement last October and Tuesday’s surprise adjustment -- called for its main policy band to “increase slightly,” while leaving the center and width of the band unchanged. Going forward, economists are mixed on what steps the MAS may take, with some seeing further steepening and others saying the band will be re-centered higher.

Because the MAS doesn’t release details of its policy settings, economists and trading desks create their own models for the currency basket and policy band. Barclays Plc, for example, expects the band to be recentered 150-200 basis points higher in April, followed by a 50 basis point slope increase in October.

“The MAS’s decision to tighten ‘inter-meeting’ indicates that policy makers are on high alert over inflation and thus likely to favor more, not less, FX policy tightening in the near term,” Barclays economists including Brian Tan wrote in a note. “We expect more signs of labor shortages to emerge, pushing the MAS’s assessment of the balance of risks further toward inflation.”

The 16 survey and research results compiled by Bloomberg include the following:

“Given building core inflation pressures alongside a still strong growth outlook, we continue to expect MAS to increase the slope” of the policy band to 2% per year, economists at Goldman Sachs Group Inc. wrote in a report.