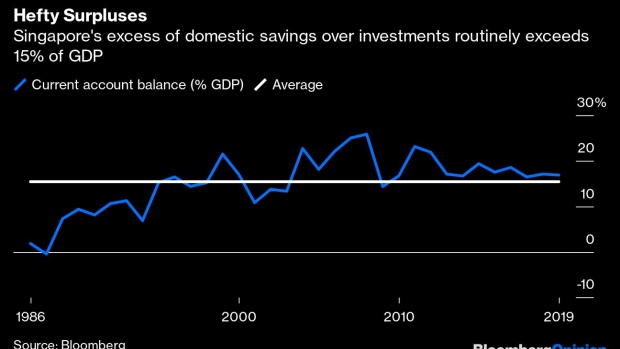 (Bloomberg Opinion) -- The more desperately Chinese firms seek a haven for their international operations, the more they’ll lean toward Singapore. Will their love be reciprocated?

Amid the drumbeats of a U.S.-China cold war, the Southeast Asian island-state is often talked about as a sanctuary for capital looking to flee the clash of superpowers. But aging Singapore, with excess savings of its own, doesn’t want a truckload of new money.

Business investments, however, are very different from potentially destabilizing financial flows. They create jobs, provide new orders to local vendors, and spark optimism about the future, something rather badly needed amid the Covid-19 despondence. That’s why Singapore must be pleased to see Tencent Holdings Ltd., Alibaba Group Holding Ltd. and ByteDance Ltd. coming to the city with investment plans worth billions of dollars.

All of them have their own reasons for flocking to the nation of 5.7 million people. According to Bloomberg News, Alibaba is exploring a $3 billion investment in Grab Holdings Inc., which is pivoting from a Southeast Asian ride-hailing firm to a regional super app with finance at its core.

Grab has applied for a Singapore digital bank license, and so has Alibaba-backed Ant Group, the world’s hottest fintech,  awaiting its initial public offering in Hong Kong.(1) Reuters reported in June that Grab and Tencent-backed Sea Ltd., a Singaporean maker of online games, have made the Monetary Authority of Singapore’s shortlist.

Running a regulated bank in Singapore comes with a valuable coupon: free admission into the U.S.-dominated global financial network. This may be important for Chinese fintech firms in case Beijing decides to run a parallel system of its own. The vehicle for that push might be the digital yuan, which could erode the moat built by Ant’s Alipay and Tencent’s WeChat Pay. More immediately, access to Grab’s customers in Southeast Asia may help Alibaba-backed online bazaar Lazada in its fight against Tencent-backed rival Shopee app, Bloomberg Intelligence has noted.

Tencent, meanwhile, may also be eyeing Singapore to skirt situations like New Delhi’s ban on the video game PUBG mobile, for which it had the India publishing rights. WeChat is already a Trump administration target. As escalating violence on its border with China draws India closer to the U.S., globally-minded Chinese firms need neutral addresses to avoid becoming collateral damage. Ditto for ByteDance, which is trying to save its TikTok video-sharing platform’s U.S. operations by partnering with Oracle Corp. The Beijing-based firm, which has also applied for a Singapore virtual bank license, will make the city its beachhead for Asia.

Singapore, which never had powerful domestic business interests to protect, isn’t new to foreigners wanting a piece of it. In the late 1960s, the likes of Fairchild Camera and Instrument Corp. came for semiconductor assembly. Young women putting together pieces of ceramics, aluminum wire and a one-inch-wide lead frame played a big role in turning Singapore — along with Hong Kong, South Korea and Taiwan — into Asian exporting powerhouses.

It’s too early to say if the U.S.-China conflict will have a similarly large and enduring impact. In areas like data centers, Singapore is benefiting. Measured by power supply, it’s the world’s largest repository for storing and processing data, with Facebook Inc. alone setting up an 11-story facility. Hong Kong has lost its special trading status with the U.S. over a Beijing-imposed national security law. Singapore has free-trade accords with both countries. The one with China was widened last year to include e-commerce.

To be sure, Singapore’s population is far less willing than before to accept a never-ending stream of overseas professionals in exchange for prosperity. Still, what’s the alternative? Visitor arrivals in July were down 99.6% from a year earlier. Singapore Airlines Ltd. is slashing a fifth of its workforce. As long as the new Chinese investors don’t ask for too many foreign employment passes, Singapore will give them a shelter to sit out the cold war. If nothing else, the island’s nascent startup economy will get a fillip.

Financial capital won’t be walking on the same red carpet. Hong Kong can live with private-sector credit three times the size of the economy and a property market pushed into the stratosphere of unaffordability. The same strategy would amount to political suicide in Singapore, where the bedrock of prosperity is real estate. A deflated housing bubble could prove costly for the People’s Action Party, in power since 1959. Unlike Hong Kong, which ultimately has the protection of the bigger Chinese economy, Singapore has no parachutes. It dare not crash.

(1) Ant, though, has applied for a wholesale digital bank license, which means it can't take retail deposits.